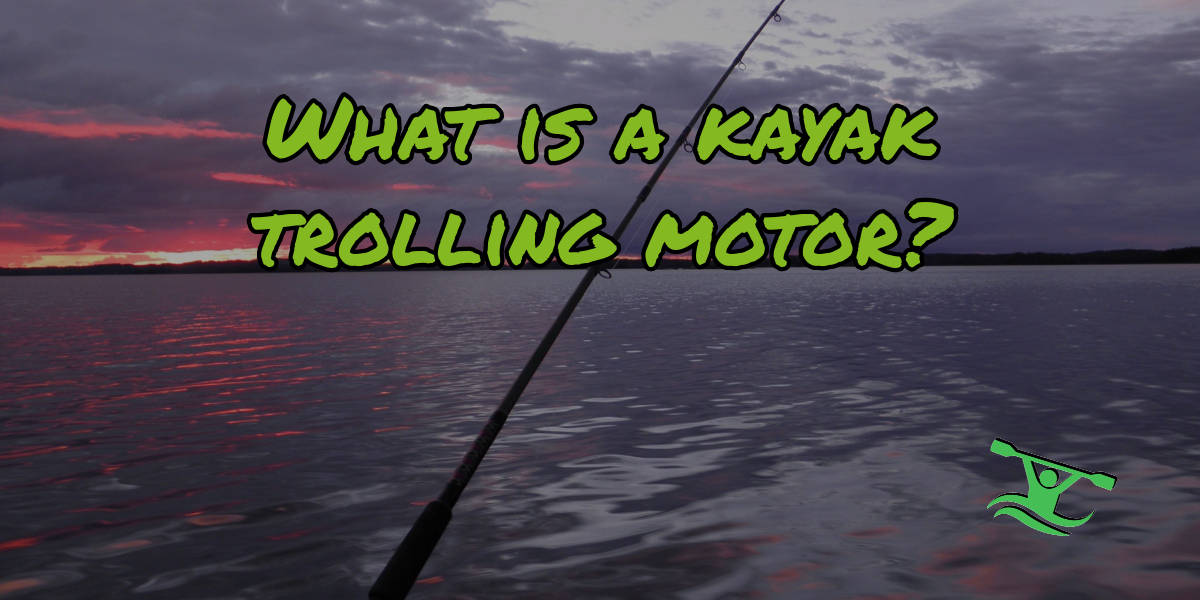 I was browsing YouTube looking for videos of my most recent purchase in action, some years ago now – this was when I bought my Sevylor Colorado inflatable kayak.

Anyway, I came across this video that piqued my interest – someone was using a little motor on a kayak!

I had never heard of such a thing before – kayaks were for paddling, motors never crossed my mind. But here we have it, a man with a motor on his Sevylor Colorado. But that boats the same as what my boat is!!

Here – have a look at the video I mean:

Why Has That Kayak Got a Motor?

Okay, so you’re probably not as naive as I was back then. By now it’s not as bizarre to me as it was way back then – but in case you aren’t aware, that’s a trolling motor. Yeah, you just got trolled.

Not really! It’s a genuine thing, and it can be quite useful for some styles of fishing and some locations. So what is it, and what is it for?

So, trolling isn’t just something that nasty people do to poor, vulnerable souls on the internet or whatever. By Not supplied (http://www.photolib.noaa.gov/htmls/fish2060.htm) [Public domain], via Wikimedia Commons

Trolling is a method of fishing which involves slowly drawing your bait or lure through the water to entice a bite. It’s a method usually used when trying to catch pelagic fish, which are fish which don’t stick to the bottom of the sea nor near the shore. An example of a pelagic fish is a mackerel or a salmon.

You can troll from a pier or a jetty, or the beach even, by slowly reeling in your line after casting; you can even simply move your rod from side to side, for instance, if you’re fishing close to your position on a pier.

“Oooooh – so THAT’S what I’ve been doing!” – I know, I didn’t even realise it had a name at first. It just seemed natural to try to entice the fish with a moving lure. Well, now you know.

Just for clarity, trolling is not the same as trawling. Trawling is done using a net which is dragged through the water; you’re not likely to find a recreational fisher who has a trawler.

What is a Trolling Motor? Based on the above, what is a trolling motor for you might ask? Can’t the same effect be achieved with nothing more than a rod and a reel?

Well, yes, but a motor takes a lot of effort out of it, and you can troll over a longer distance with greater ease because you’re not limited by the distance you can cast.

The type of trolling motor you can see in this video is pretty nifty; a self-contained, battery-powered motor made by Sevylor. It provides 18lbs of thrust – as you can see from the video, it gets that inflatable kayak going a treat.

Trolling motors are often electric, although you can use a gasoline powered outboard for trolling. I wouldn’t give that a go in a kayak though!

Do I Need a Trolling Motor?

If you have to ask that question, then no – I doubt it. I like the idea of having one as a nifty bit of fun, but I don’t think it would have much use for me personally.

If you are really into the idea of trolling, and you don’t think you can scratch that itch by letting the current take you a little way, or by reeling in a nice spoon lure, then, by all means, go ahead and get a motor. They’re actually pretty reasonably priced, and easy to get hold of. I guess one potential use is to take a bit of the strain off of you when you’re paddling, but I wouldn’t want to have to rely on one in an emergency (for instance, if you lose your paddle or are suddenly overcome by exhaustion or cold water shock or something). Then. I also guess if either of those things happened I’d be really grateful for a motor, but having it as an option might just make me more inclined to take a risk? I dunno.

Okay, no problem. After all, having one would help you get about faster and cover more distance with less effort. All good stuff.

But I have a few things I’m going to suggest that you consider first.

This is more of a consideration for saltwater paddlers – some motors may not be suited for saltwater because the salt can cause some components in them to corrode. Be sure to check that the model you are looking at purchasing is suitable for saltwater if that’s where you’re going to use it.

This is going to require some sleuthing on your part. You need to figure out how much thrust you are going to require to propel your boat – think about the laden weight of your boat. The trolling motor shown in the video above gives 18 lbs of thrust, and it gets that Colorado going, albeit slowly.

If you have a bigger, heavier boat  – let’s say, not inflatable and 16-feet long, then you’re going to struggle to see the benefit of 18 lbs of thrust. However, for not much more you can get a motor that provides 50 lbs of thrust. So make sure you consider that before buying.

By this I mean “will it fit onto your yak?” The motor I showed in that video is designed to fit Sevylor boats, including the Colorado. You can also find other videos on YouTube that show you how to fit a trolling motor to various yaks.

For an example, see this video:

Make sure to verify that the shaft length will be adequate for your purposes and that the fitting will either fit your boat natively or that you are happy to bodge it together.

I hope this short guide has been a bit of help – I didn’t intend to write so much, it just sorta flowed out. If you do get a trolling motor, hit me up on Twitter or something and show me how it goes!