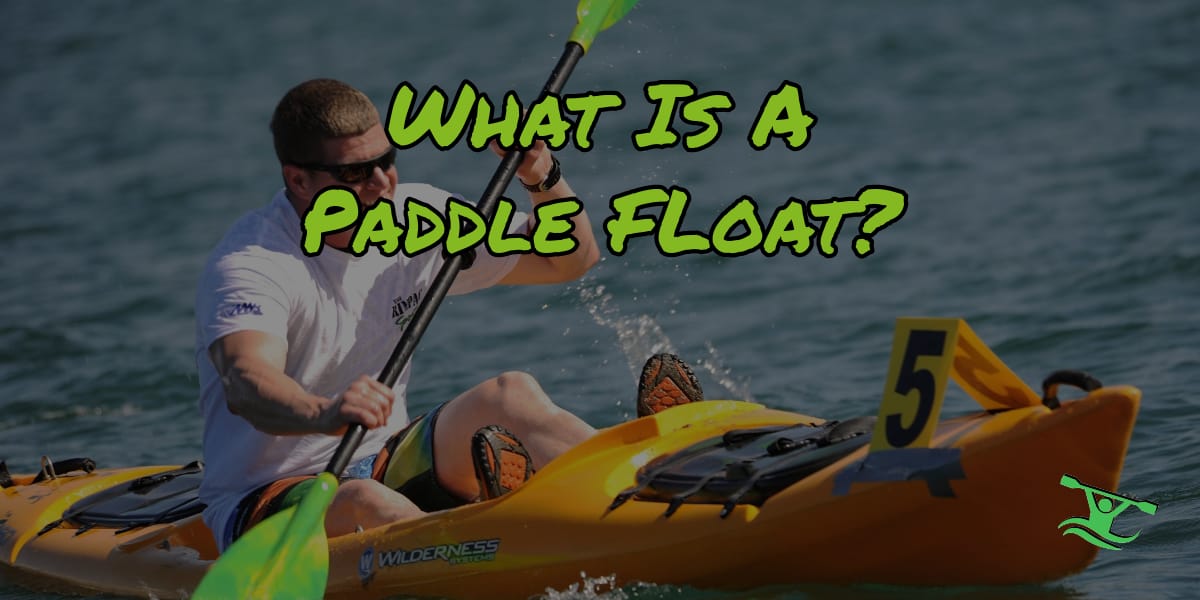 A paddle float is, in my opinion, an extremely useful piece of kit especially for a beginner kayaker.

It’s something that I would recommend you keep in your arsenal for every outing because at some point you’re going to fall out of your yak or flip it over. A paddle float is extremely useful in this situation as it helps your right your kayak and get back in with greater ease than would be possible without.

I won’t go so far as to say that it’s essential, but it’s highly recommended for beginners. As you become more confident in the water, you may find that it is unnecessary or perhaps even a bit burdensome. It may, in the end, become just one more piece of kit to struggle with.

So, What Is A Paddle Float?

A paddle float is basically a small inflatable bladder or cushion which you attach to the blade of your paddle. The inflatable cushion has a pocket into which you can fit your paddle blade, and then a strap to tie around the shaft. Look at the photograph to get a better idea of what I mean.

By Mfranck (Own work) [CC BY 3.0 (http://creativecommons.org/licenses/by/3.0)], via Wikimedia Commons

This setup forms a rudimentary outrigger, which improves the stability of the kayak by effectively giving it a much broader base – like having a wide stance versus a narrow stance when you’re squatting in the gym, or performing martial arts.

When To Use The Paddle Float

Of course, the float is of no use if you don’t have it with you when you exit the yak. If you’re knocked out by a wave and your paddle float is sitting behind your seat, then it’s not much use. This is why some people are down on the float method of re-entry because it’s reliance on another piece of equipment which could go missing or malfunction in some way.

By flickr user “abkfenris” [CC BY 2.0 (http://creativecommons.org/licenses/by/2.0)], via Wikimedia Commons

I’m still convinced it’s a great tool to have, though – in most situations you won’t lose your boat completely, and so you can usually find the float. Keep it somewhere easily accessible – not behind a hatch where it might be lost behind other bits of kit in the event of a capsize.

So a paddle float is great for new paddlers – it gives you the confidence that you can get back in if you come out, without having to swim for shore while dragging your kayak. You can work on other re-entry methods at your leisure, ideally in shallow water.

How To Use The Paddle Float

So now, how to use it? You’ve come out, and your yak has capsized. What use is this inflatable bag?

Well, the first thing is to keep hold of your kayak. Hook your leg into the cockpit, and lie back in the water – your PFD will keep you afloat. Relax.

Now, paddle float in one hand and paddle in the other – slide the float onto the blade. Practice this before you need it! Try it out on dry land. Now, inflate it – some paddle floats have a bladder both sides of the blade, others on one side, some have two inflation valves and some two. Be familiar with your equipment!

Now with the bladder inflated, and any other precautions – such as tying the float to the paddle shaft – taken, rest the other blade of the paddle on top of the yak, and use the added stability of the paddle and float combo to heave yourself out of the water onto the kayak.

The best way to do this is to immerse yourself to high chest or neck level, then use a combination of your arm on the paddle and your legs kicking to cannon yourself out in a diagonal direction towards the kayak.