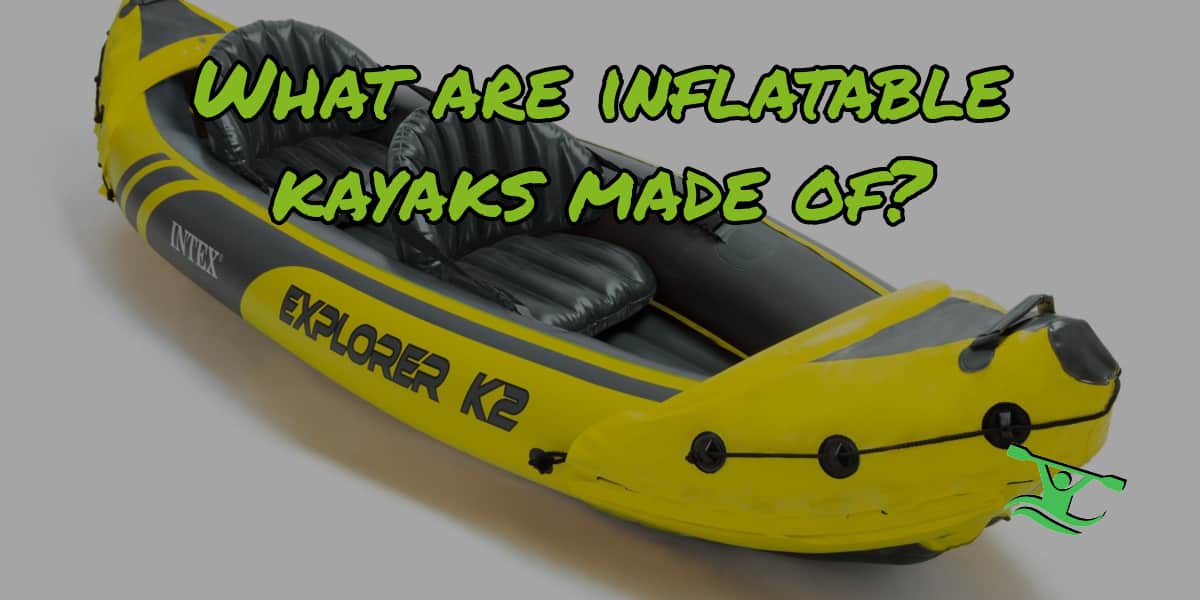 Inflatable kayaks come in a variety of models and materials. They can be cheap PVC blow-up toys up to aluminum-ribbed, rugged, seaworthy watercraft. In this article, we’ll have a brief look at what the different materials that go into constructing inflatable kayaks are, and what it means for you.

First of all, I’ll define the different types of inflatable kayak you can get. I do not include pool toy style kayaks on this list because they aren’t really boats but are toys which shouldn’t be taken out onto anything more challenging than your local swimming pool.

A lot of inflatables are what I like to think of as canoe-style. They’re not quite a sit-in kayak, with a covered cockpit – nor are they sit-on-top type yaks. This is perhaps the most common of the inflatables, think Sevylor’s range including the Tahiti, Colorado, Yukon, Big Basin etc.; another example would be the Sea Eagle SE370.

These are great yaks for beginners and more experienced paddlers alike. They tend to come with three separate air chambers – a bladder on either side forms the side walls of the craft and an inflatable floor. This means they are very reliable and you’d have to be pretty unlucky to sink it entirely.

These types can have exposed air chambers, as I believe the Gumotex Solar kayak does, or they can be covered with a hard-wearing, abrasion resistant material like the Sevylor Colorado.

Not as common as the canoe-style kayaks I mentioned above, but still pretty widely used, is the sit-on-top style. These are usually smaller craft and are often of a more lightweight construction.

This isn’t necessarily because they are poor quality – it serves a purpose, in the sense that a lighter material can be packed more efficiently and carried more easily. Just look at the Coleman QuikPak – a SOTK that packs up into a rucksack you can wear on your back while hiking.

The Intex Challenger K1 is another instance of this type of inflatable. This kayak is made of a single layer of tough vinyl – while being puncture resistant, it isn’t puncture-proof, and since the air-chamber is essentially exposed, a single prang will be enough to sink you (or at least one side of you!).

These are the higher-end type of inflatable kayak. An example is the Advanced Elements AdvancedFrame – it has aluminium ribs running down its length, which adds to its tracking ability and keeps it rigid, more so than most other types of inflatable kayak.

Again, these are made of high-quality materials and are unlikely to sink like a stone since they have separate air chambers.

The price of the kayak and they material used are often correlated – the cheapest one I have mentioned on this page is the Intex Challenger K1 which is made from a tough vinyl while the more expensive models are made with materials with exotic names such as Hypalon and Nitrilon. More commonly you might encounter PVC coated fabric.

PVC, or polyvinyl chloride, is a very common plastic found in many applications. When used in things like pool toys or inflatable boats it has plasticizers added, commonly pthalates. These are thought to be harmful, although it’s unlikely to cause you any harm to be paddling in a phthalate treated boat.

PVC is not as UV resistant nor as strong as the next two materials, and for that reason, it is often used in the more affordable kayaks. However, it is easier to repair or patch, and it makes for a pretty solid construction. It is also often used as a coating on another fabric such as polyester which acts to waterproof the polyester and strengthen the PVC significantly.

Hypalon and Nitrilon are brand-name materials made of layers of synthetic materials and woven fabrics such as neoprene. They tend to be very UV resistant, are waterproof, fold up into a more compact package and are lighter. They are also more expensive than the alternatives.

noted for its resistance to chemicals, temperature extremes, and ultraviolet light. It was a product of DuPont Performance Elastomers, a subsidiary of DuPont.Along with PVC, CSM is one of the most common materials used to make inflatable boats and folding kayaks.[1] It is also used in roofing materials and as a surface coat material on radomes owing to its radar-transparent quality By Peter Southwood (Own work) [CC0], via Wikimedia Commons

Boats that use Nitrilon include the Gumotex range of excellent inflatable boats (http://www.gumotexboats.com/materials-we-use). Nitrilon is cheaper than Hypalon but more expensive than PVC. It also is thought to perform better than PVC.

Ultimately the best choice is the kayak that suits your needs. If you want to read more, then click here to go back to my buying guide which has lots of information on choosing the right inflatable kayak for you.