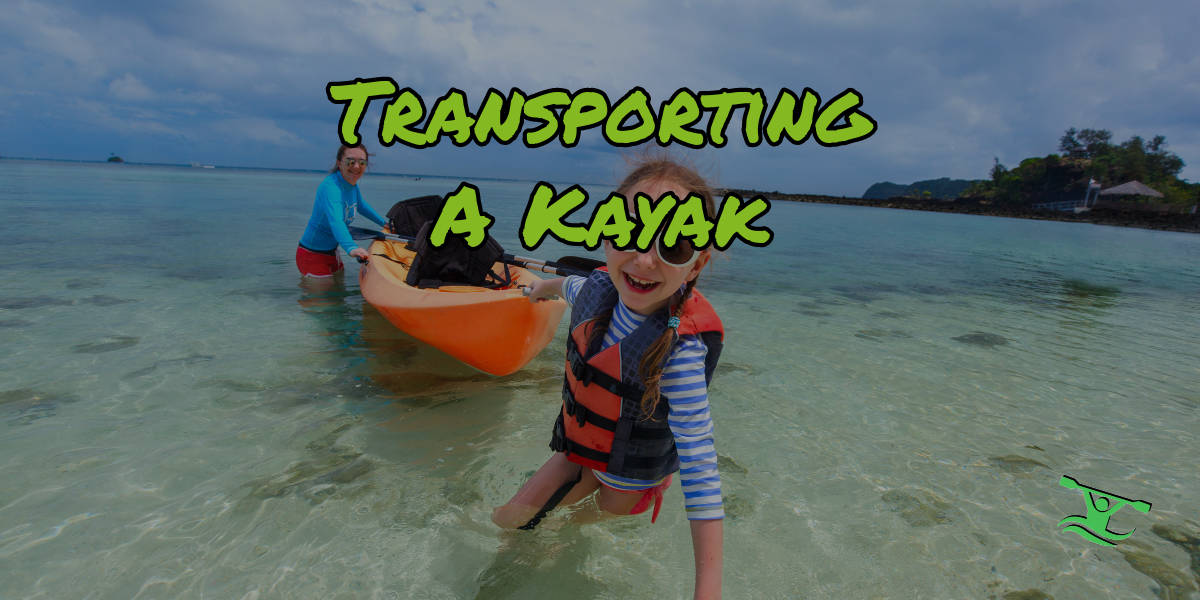 Transporting a kayak can be a bit of a chore. Portage is the act of carrying a boat over land, something you might have to do to avoid any particularly difficult bits of water such as falls and extreme rapids. You might also cut across land to cut some sea time off your voyage, especially if there’s a convenient bus and you’ve had a few too many beers to trust yourself at sea.

Anyway, that’s a story for another day.

As I said, it’s a chore. That’s what this article is about. Oh, joy.

Obviously, portage isn’t the only time you’ll want to transport your yak. Getting it to the water in the first place might be a challenge in itself!

To that end, let’s look at a few methods of transporting a kayak.

A kayak trolley will help you to transport your yak a short distance. Kayaks aren’t that heavy (well, some are – and if you have gear, extra rigging etc., it all adds up), but they’re not fun to carry any distance.

I guess the only exception is a tiny inflatable kayak like the QuikPak which you can wear as a backpack. But other than that, I hate carrying them. Even when it’s not the weight, it’s the bulk – they are like ten feet long or more, you can’t turn around without knocking people in the knees or getting caught on a tree trunk or fence post. Heck, a sea kayak can easily be 16 feet long.

So,a trolley makes it a lot easier. It’s basically a set of wheels upon which you balance your kayak – you can get platform and “scupper hole” carts. I prefer the platform cart because I’m wary of anything putting extra pressure on the body of the kayak and potentially opening up a crack or something.

The closer to the middle you put the cart, the more weight it takes off your hands, but the far end will swing out when you turn a corner so just keep an eye on it.

If you don’t have a trolley or cart, you can usually fairly easily carry a kayak by yourself or with a friend.

If you have someone to help, the easiest way is for you to go bow and stern, and carry it that way. Some kayaks have grab handles in these positions, or you can probably fashion something yourself if you need to. You can your friend can carry a kayak each in this way – one in each hand.

You will be able to carry it a fair distance like this because it’s a good position to be holding something heavy – most of the weight is borne by your shoulders and legs, and you have a good strong hold on it. Transporting a Kayak By Car Or Truck

There are a couple of ways of transporting your yak on vehicle. The obvious ones – if you have a flatbed or a pickup truck or something similar, you can just put the kayak in the back, strap it down, and you’re good to go. There are a few safety considerations that I’ll get into in a minute, but that’s pretty much it.

However, if you’re transporting it on the roof of a vehicle, then you will need some sort of a roof system. This can be roof bars that you would find on an SUV or aftermarket roof bars. It could also be a soft bar system.

Soft bars or a soft rack are removable “bars” often made of foam, which you can quickly attach to your car – provided it’s a four-door car. It works by strapping the system to the roof, with the front bar strapped through the driver and passenger doors and the back through the rear doors.

The kayak is then strapped to the bars, and job’s a good un. The only problem with this system is that it doesn’t provide much elevation between the kayak and the roof of your car. If the car roof is excessively curve, or if the kayak is a bit of a banana, then it might contact the roof and cause some damage – either to your car or to your yak. If you have gear rigged up to your boat it doesn’t provide much clearance for that either; rod holders, for instance, may end up scratching your paintwork.

It’s very quick and easy to set up this sort of system, so if your car doesn’t have a roof rack, then this will do in a pinch. It’s not likely to be the ideal solution, especially not if you’re travelling a long distance or doing so frequently, but they do work.

If you do use these, you still have to have the safety precautions below in place.

A rigid roof rack, either factory installed or aftermarket is the usual solution for carrying large loads on your car. It will certainly do the job of transporting your yak.

It is a simple case of strapping the kayak down to the front and rear crossbars, in most cases. There are, of course, other accessories available, such as J-bars and stacker bars, which are especially useful for securing two or more kayaks. A J-bar acts as a sort of cradle to which you strap the kayak, while stacker bars allow you to safely and easily secure your kayaks on their edge, allowing you to easily secure a second or third kayak beside them on the roof bars. If you are stacking multiple kayaks, it should be obvious that you ought to use extra straps for each yak – doing so gives you extra points of redundancy, making it less likely that a part failure will cause you to lose your load.

How to use Yakima stacker bar:

There are a few things that you need to keep in mind. First, having a poorly secured kayak on your roof could lead to it being a rather unpleasant missile in an accident. It could catch the wind and slip off backwards, causing untold damage to cars caught behind you, or could come off forwards if you need to stop suddenly. There is also the chance that it could twist around if it is poorly secured or if a strap fails, turning your car into a wannabe-glider.

The best thing you can do to stop this, and it should be a requirement when transporting a kayak, is to use bow and stern lines. Attach one end of either a non-stretch rope or ratchet straps to the bow and stern of your kayak and the other end to an anchor point on the front and back of your car, respectively. For instance, the bow line could be secured onto the towing eye of your vehicle, and the stern line to a part of the chassis using an S hook. This simple intervention will prevent the kayak from being able to twist sideways and makes it much more unlikely to come off the front of back of your car.

Another thing to do is to use a cockpit cover on a sit-in kayak – this reduces wind resistance against your vehicle, and prevents bits of debris being blown into the boat. If you think about it, your kayak basically a big, rigid parachute strapped to the top of your car if it’s left open.

The final safety feature I suggest you use is a high-visibility marker on the stern of your kayak, to make sure any other road users are aware of the extent of your load. Obviously, because your kayak will be longer than your car, it will extend beyond the front and rear bumpers – especially a sea or touring kayak. This additional safety measure reduces the risk of someone clipping it by not noticing the end.

Remember also to check the fastness of your straps, especially on a longer journey. It’s not time to get complacent when you’re a few hundred miles into a journey with the same again left. It is probably a good idea to have some spare tie-down equipment, be it ropes or straps, just in case of a failure.

Oh, and if you’re worried about theft, you can get lockable straps, such as those from Thule, which can only be slackened off with a key and have a cut-resistant steel core. These will slow down any would-be thief, although they may not totally prevent theft. A bike chain may work if you have a suitable attachment point on the yak. Or a long steel cable through the scupper hole works.