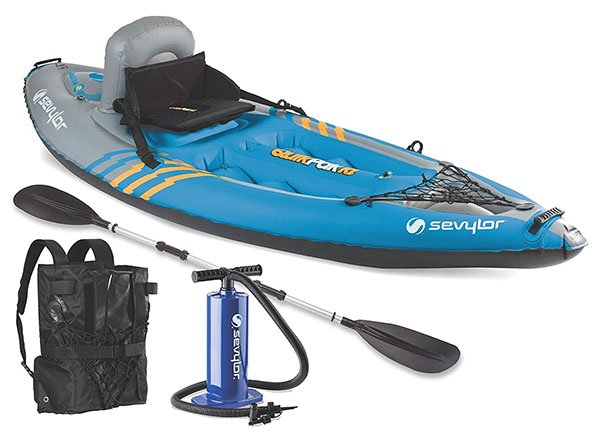 One of the biggest balancing acts pervading any purchase of kayaks is that of portability versus durability. On the one hand, kayaks can go well with all manner of watery settings from placid lakes to racing rapids – assuming you can get them there. A heavy kayak may make for an uncomfortable schlep as you try and drag this large boat to the water and back to your vehicle. On the other hand, all that weight is often the result of the heavy-duty plastic that makes a kayak durable. It won’t matter if you can get your kayak into the rapids with ease if a couple jagged rocks can puncture it easily.

Enter the Sevylor Quikpak K1. It is an inflatable kayak, which immediately puts it in the category of kayaks that are lightweight but in greater danger of puncturing. That may be a problem for other models, but this model comes with a couple of key features that can keep it afloat.

The biggest safety feature the Sevylor Quikpak K1 has in its favor is the inclusion of multiple air chambers that are used to help keep it from sinking should you accidentally strike a rock or other hard surface. The chambers are designed such that even if one is breached, the rest can still keep the kayak afloat. If that sounds familiar, it’s because that was the same method the Titanic used, but the quality of this system is such that you won’t have to worry about reenacting its sinking a la Kate Winslet and Leonardo DiCaprio.

Measuring 8 ft 7 in. long and 3 in. wide, this model is slim and narrow, yet still has a tremendous carrying capacity of 400 lbs, which is more than enough to support a few passengers and pets if you don’t mind squeezing into the slender cockpit.

It comes with a hand pump for inflating the kayak. It also comes with a backpack that makes it easy to pack, which is of course made all the easier by the fact you can inflate and deflate this kayak as needed to take it wherever you want to go.

Other essential features of this model include:

As noted, one of the biggest problems with choosing an inflatable over a more rigid, heavy-duty kayak is the risk of puncturing.

In addition, this model stands out for providing more comfort and space than is typically expected of an inflatable kayak. It is more spacious than your average kayak and, better still, that footrest and backrest provide extra support. Even better, these can be adjusted to give you more room, allowing you to figure out your best setup and arrange the kayak accordingly.

The lightweight build and spacious interior also means that it is one of the more family-friendly ones. Unlike larger, heavier models, even children can handle the kayak’s inflatable nature and lightweight oars. That said, the oars are actually one of the features to which users have responded most negatively. The oars are weaker and the plastic connectors can sometimes break. You naturally don’t want to find yourself stranded on the water because of this, so you may want to consider buying additional paddles if you are going to be doing some heavy rowing.

It is also on the more affordable side for a kayak, once again reinforcing its family-friendly reputation. While its affordability can be somewhat mitigated by the weaker oars and potential desire to purchase replacements, this is still a pretty affordable kayak.

The unit is also easy to inflate with the included hand pump, though some users have preferred using their own, electrically-powered pump to do the job faster and with less strain. Either way, this model inflates easier than many models, adding further to its reputation as a user-friendly kayak.

One thing users have said against this model’s favor is its inability to navigate through rough conditions. In fairness, inflatable kayaks are rarely designed to handle that, and that’s definitely the case here. Still, if you plan on rowing in conditions that have strong winds or currents, you might need a stronger kayak.

Finally, some users have reported that this model isn’t all that fast. That shouldn’t be a surprise for an inflatable model with weak paddles, but it’s still something to consider.

There are several positive elements to recommend this model, including:

Some drawbacks to be aware of when considering this model include:

The Sevylor Quikpak K1 does an admirable job of attempting to balance portability and durability. Its multi-chamber system is a masterstroke that, paired with the tarpaulin underside, lets this inflatable kayak be more durable than you’d expected.

There are certainly a couple of drawbacks to this model. Its small size means that it can be buffeted and blown over in strong winds. The small size makes it hard to store gear for fishing.

Still, there is a lot to like about this model. The small size also makes it great for beginners, and it has far more carrying capacity than you might expect. Inflatable models are often in danger of puncturing, but the multi-chamber system used by this model mitigates that spectacularly. The double lock design and tarpaulin bottom likewise help make it far sturdier than you would expect an inflatable kayak to be. And, hey, you get a cup holder too, so what’s not to like?

All in all, this model is a fantastic option for those looking for a lightweight kayak that’s portable, durable, and dependable.