Paddleboards are by far one of the most popular forms of entertainment among those who love a day on the water. At the same time, there is no shortage of questions as to the nature of these boards. How durable are they? What can they do? Who are they best for? 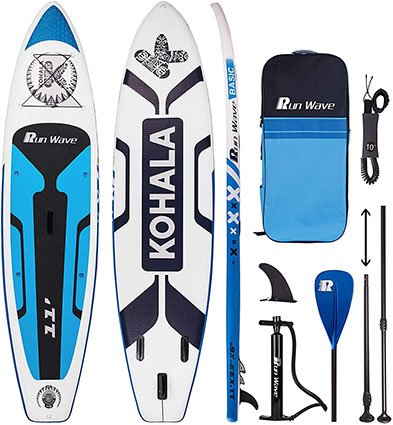 The answer to all of those questions and more will vary depending on the nature of the paddleboard in question. With a unit such as the Runwave paddleboard, you’ll be able ride on a solid overall board that comes with a bevy of desirable features.

Among the most important features included in the Runwave inflatable paddleboard are:

The first thing you are likely to notice about this inflatable paddleboard is its size. Eleven feet isn’t unheard of for a paddleboard, but it is easily on the longer side. There are several effects of that, not the least of which being that this board can support more weight than a lot of competitors. You don’t want to clamber aboard a board only to be dunked right into the water because it cannot support your weight. That can be a problem with some other paddleboards, inflatable and hard-shelled, but that isn’t the case with the Runwave paddle board. With a weight capacity of more than 350 lbs, it is safe to say that this board can support most riders just fine. In fact, 350 lbs can potentially be enough to hold two fully-grown riders, or alternatively, one rider and fishing gear.

That could be huge because the flip side of this board being so big is that it’s probably not for beginners. It takes some skill to be able to handle a board this big. That said, by having such a high weight capacity, the Runwave inflatable paddleboard also allows you to take someone along for the ride, which is a nice touch for those looking to teach someone else the ropes about paddleboarding.

Another notable element of this model is the fact that it is made from durable PVC material. One of the biggest concerns about inflatable paddleboards, boats, and other waterborne inflatables used to be that they would pop like water balloons the second they hit any kind of adversity out on the water. That’s simply not the case anymore. Sure, they aren’t as hard as hard-shelled options, but that doesn’t mean that modern inflatables are flimsy. On the contrary, boards such as the Runwave paddleboard with its PVC covering prove that the technology has come a long way and is now as dependable as it is durable.

That doesn’t mean that your board won’t meet with some bumps along the way, which is why this model comes with a repair kit. This is a relatively standard feature with a lot of paddleboards, inflatable or otherwise, and it is good to see it included here.

Then there is the nonslip deck. If you have ever gone paddleboarding before, you know how tricky it can be to stay onboard the paddleboard when water starts splashing on top of it. You don’t want to lose your balance and plunge into the water, and a nonstick deck such as the one included in the Runwave inflatable paddleboard is such an important feature.

Finally, this unit inflates and deflates very quickly in just five minutes. If you have ever been forced to wait around for an inflatable paddleboard or boat to inflate or deflate, you know how big of a deal that is. Whether you are eagerly waiting to get out on the water or exhausted after hitting the waves and wanting to pack up, you don’t want to be kept around waiting. The fact that inflatable models take time to inflate and deflate are a key difference they have over hard-shelled options, and one area where the latter often have an edge. However, by being able to inflate and deflate so fast, the Runwave inflatable paddleboard does a good job of adding some extra convenience to this model in a way that doesn’t necessarily exist with a lot of others.

Some of the upsides of this model from Runwave are:

Some of the potential drawbacks of this model are:

The positives of this model have already been noted above. The large size and weight capacity means it can support riders big and small with ease. The short inflation and deflation time ensures you can hit the water as soon as possible. Its durable construction ensures that you won’t spring a leak too easily. The nonslip deck is very helpful in terms of keeping your balance.

At the same time, some users have found the unit’s large size a bit too much. Again, this is especially true among beginners. While this model can accommodate younger riders and adults, providing the latter an opportunity to teach the former, it may be too much for younger, lighter solo riders.

At the same time, some users have reported that their model had a strong plastic smell. Given the fact it is made out of plastic, that shouldn’t come as too much of a surprise, but still, you should probably air it out a bit before using or storing it.

The Runwave paddleboard is a big paddleboard that offers big-time performance for its size class. It is definitely designed for a more experienced clientele, but it still has enough weight capacity to support a pair of riders with one teaching another.

Throw in good valves and a nonslip deck that makes keeping your balance a breeze, and this paddleboard from Runwave can rock your paddleboard world for sure.