More and more people are enjoying kayaking. According to Statista.com, the number of people kayaking in 2019 was approximately 16.62 million active kayakers in the U.S. This is up from 16.38 million in 2018. If you go back to 2009, only 6.1 people were kayaking. We can see the numbers are increasing year over year. 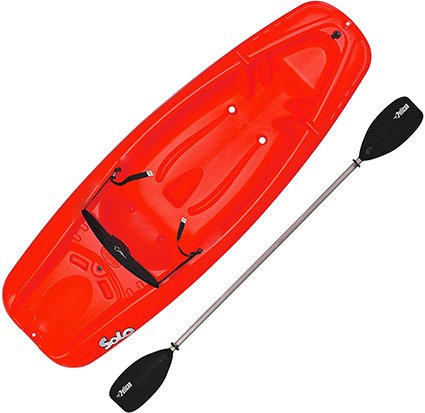 Another report conducted in 2015 about all paddle sports found that there were over 21 million “paddlers” in the U.S. This group includes canoeing, rafting, kayaking, and stand-up paddle boarding. Of these, kayaking is the most popular. The report also noted that while white river kayaking remains popular, more people are choosing recreational kayaking on calmer bodies of water. The most growth is with women. Recent statistics showed that 62% of paddlers are now female.

The new interest from women could be because it is a low-impact activity that increases muscle strength in the arms, shoulders, back, torso, and legs. It also improves cardio fitness and does not cause distress to joints and tissues. Plus, it is a lot more fun than sitting on a stationary bike or a treadmill.

Today the entire family is enjoying kayaking, so many makers are developing kayaks scaled down for kids. The size is a bit smaller, and most of them weigh around 20 pounds. Even youngsters can carry their own kayak to the water.

Kayaking is a fun activity for the entire family. With COVID-19 still being a concern, people can enjoy kayaking while keeping their distance from others. So, kids can get together with friends and kayak without worrying about spreading germs with each other since it is a solo activity.

We are going to look at one popular youth kayak in this article, the Pelican Solo Kayak made specifically for kids. This kid-sized kayak is six-feet long and weighs only 19 pounds. It is made for kids no more than 100 pounds.

Here are some other features of this 6 ft. kayak:

The Pelican Solo Kayak was developed, so kids would have their own kayak at a size and weight that is easier for them to carry. This kayak may be a great option for those with young kids ready to start kayaking and are more comfortable in one that accommodates a smaller size and lighter weight load.

What Users are Saying about The Pelican Solo Kayak:

We decided to check some of the comments that were posted by purchasers. Most people are commenting on the product upon arrival, and not critiquing the product on a body of water. Also, since is a product geared to kids, it is adults who are placing the reviews. That is important to keep in mind as you read the reviews.

According to these reviews, it appears that the Pelican Solo Kayak is good for beginners, but there have been some issues with the product going out without paddles and sometimes missing safety flags. Also, only the red model comes with a backrest. These are some things to keep in mind if you are considering purchasing this kayak.

As we have ascertained from the reviews, this is a good product for youngsters just getting started. It is not a kayak that will be used by high school or young adults as it has weight restrictions, but for young kayakers, this can be a great first kayak.

This appears to be a good kayak for youngsters just starting out. One warning to adults purchasing this product, make sure you are aware of what color you are ordering as this will dictate what accessories are included. It is a bit confusing, and perhaps why so many people mentioned they did not receive accessories like paddles and flags. For a youngster 6 ft kayak, this seems like a rather good starter kayak.