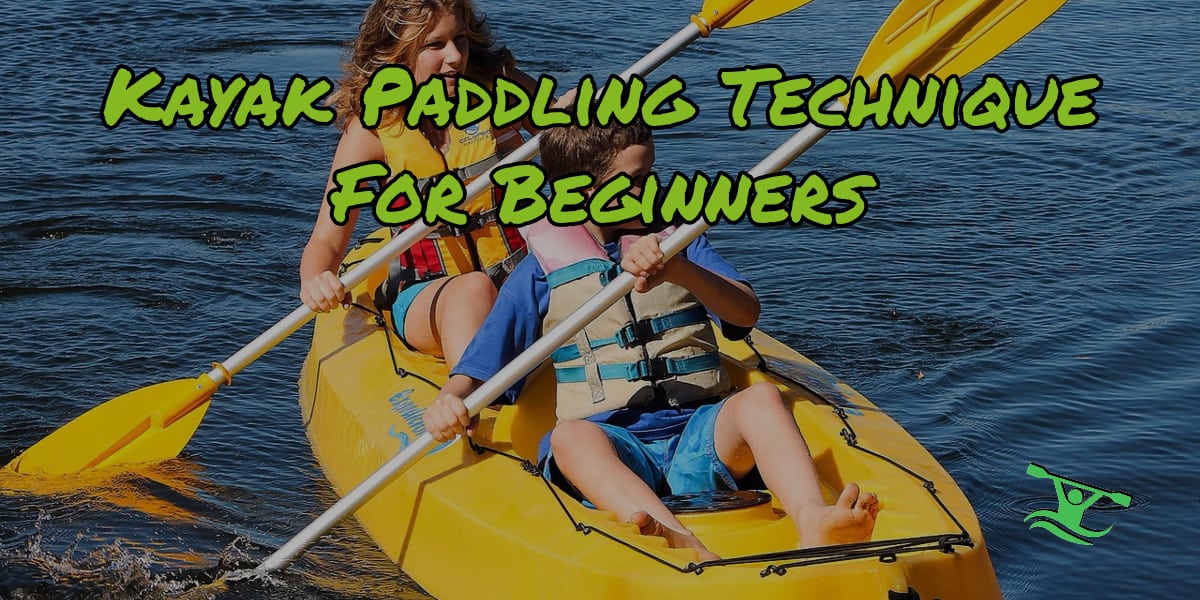 At the risk of sounding obvious, paddling technique is something you will have to learn as a kayaker. Especially if you’re a newbie, as we all are at some point – it’s something worth taking some time to get right.

I remember when I first went kayaking. Let’s be honest; there’s something fairly intuitive about how to maneuver a kayak using a paddle. It’s like swimming, you flap the broader end through the water and hope it moves you in the right direction.

Needless to say, I ended up going around in circles for a lot of my first excursion. And my second, and probably my third too.

When I got an inflatable yak, that just made things worse! They tend not to track particularly well, especially the cheaper models. It seemed like no matter what I did, I was going sideways or backwards. I cleaned up my stroke a little bit, fitted the skeg that came with it, and it all was fine.

But thinking back to this time gave me the idea to write a little bit about how to paddle effectively, some advice for beginners.

Like I said above, stick one of the broad ends of your kayak stick in the water and flap it about. That’s the basics. It gets tiring though, and an inefficient stroke will finish you off much faster than it should. I like to make an analogy with weightlifting – say you’re starting to learn to squat.

If you just jump in and squat however you like, you’ll probably do something that resembles a squat.

However, it’s likely that you won’t progress as fast or as efficiently because you are getting into bad habits. Not squatting deep enough, for instance, or letting your knees cave in, flexing your lower back, standing too narrow or too wide.

The thing is, you get used to doing all of these things, and when you’re stuck at a certain weight, it becomes much harder to progress because as well as having to get stronger you now also have to un-learn all of these habits which have become ingrained.

Okay, that analogy seemed much clearer in my head. Maybe I labored the point a bit. Skip to the end… learn to paddle well, to begin with.

The first thing to do is look at your paddle. There are a few characteristics of a kayak paddle which you need to be aware of: Usually it is easier to learn with a parallel paddle, but fortunately, many paddles can be adjusted. Look along the shaft for a little button – you should be able to press this, twist the shaft and click it into a parallel position.

If you can’t, it’s not a problem – you’ll just learn to use feathered blades.

Look now at the paddle blades themselves. A symmetric paddle blade just looks like a shovel or spade; it is basically a rectangle or an oval. An asymmetric blade will be slightly longer on top than on the bottom of the blade, a bit like a trapezoid shape – or a person pointing a stubby finger.

A curved blade has a slight curve that leads back towards the paddler, whereas a flat blade is… well, it’s flat, innit?

I don’t want to teach you to suck eggs, but we’ve all done it or seen someone do it, so here we go. Hold the paddle roughly equidistant from either end. Go with shoulder width for now.

Now, as you hold the paddle you should see the blades curve back towards you at the tips, and the shorter edge of the blade should be at the bottom – of course, this means the longer edge is on top. Congratulations, you’re holding the paddle correctly!

But wait – there’s more. Bring the centre of the shaft up to the middle of the top of your head or thereabouts – halfway between either end. Now adjust your grip position so that your knuckles are on top, and your elbows are at about 90 degrees each. This isn’t a perverse game of Simon Says. What I’ve got you to do is to form what is sometimes called the paddler’s box. No, it’s not dirty – this helps you to maintain good form and posture as you paddle. You can relax your grip now; this isn’t a white-knuckle adventure. But keeping that position allows you to use your torso to transfer force to the paddles effectively.

This is the stroke that you use to go forward, natch. It is tripartite (what a word):

In the Catch, you use your torso and arm to reach the paddle blade forward on one side, and fully immerse it in the water near where your feet are. You should try to slice it in gently, rather than splash it manically – this means less wasted energy and less water all over you.

Then, using torso and arms again, draw the paddle blade back on one side and push the other end of the paddle forwards. This is the Power.

Then Release by drawing the blade out of the water just as your hand reaches the level of your waist or hip, again with a slice rather than a splash.

Hey, neat – you’re now in the correct position to immerse the opposite side’s blade. Just rinse, and repeat. By Isles Yacht Club [CC BY 2.0 (http://creativecommons.org/licenses/by/2.0)], via Wikimedia Commons

To either slow down or go backwards, use the reverse stroke.

As the name suggests, the reverse stroke is basically the reverse of the forward stroke. First, drop the blade into the water neatly, use the power of your torso to push it forward (and draw back on the other side), then slice the blade out of the water.

Repeat on the other side.

Similar to the forward stroke, immerse the blade fully at the level of your feet then draw it back in a wide, sweeping arc.

If you sweep on the left-hand side, the prow of your yak will turn to the right. And vice versa.

The difference with the forward stroke is the big, wide arc and also you don’t release until the paddle blade is way behind you at the nadir of your arc (behind you, pretty much).

You can sweep again if you need to, or resume forward strokes.

You’re getting the hang of this now, aren’t you? This is an easy one then.

Imagine if you are approaching a pier or a riverbank or something and you are parallel to it. You just want to scoot a little closer to it, what do you do?

Don’t hit the hull of your boat, and don’t accidentally use the paddle shaft as a lever to capsize yourself (you’ll know what I mean if it happens). If you do hit your boat, just relax and draw the paddle out of the water without dragging it.

As I said above, make sure you use your torso and not your arms. Obviously, you don’t have to let your arms go totally floppy like wet noodles, but also don’t keep your torso rigid like you’re standing to attention on parade. Use the power of your core muscles to power your yak.

The other thing you often find beginners doing, and it’s something I hinted at when I mentioned my first inflatable kayak experience above, is getting sloppy. Your first few strokes are going to be perfect, probably – but you start getting tired, or excited about the trip, or just plain forget to pay attention. Then your blades start going through the water at an angle, or you stop short, or stroke too far. This really has an effect, so pay attention to your stroke until it’s a habit. There are plenty of other little bits you’ll pick up as you learn, for instance using your paddle as a bow rudder to control your direction, or letting it drag to turn you.

But that’s about it for the basics. The above should get you going forward, backwards, and even side to side. Heck, if you figure out how to go up down in a kayak let me know!