Origami is the Japanese art of paperfolding. There is no shortage of what you can make with a few folds of paper, but what about a kayak?

Well, yes, you can make an origami kayak, but the real question is whether you can find one that can be folded up as easily as an origami design? “On paper,” the task may seem easy, but in practice, it can be hard to see how a kayak can be so foldable and portable yet durable enough to handle the waves. 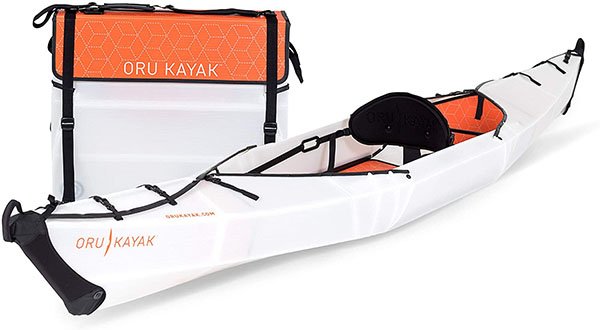 That’s the quandary that the Oru Folding Kayak attempts to solve. It promises seamless folds, but will it fold under pressure?

What to Look For

First, it’s worth remembering what you want to look for in a portable kayak in the first place. With so many kayaks on the market, you have plenty of choices from which to choose, but some key qualities tie all of them together.

One such quality is how they manage the all-important balance between their lightweight design and durability. On the one hand, one of the biggest benefits of these kinds of kayaks is the fact that they are supposed to be much lighter than hard-shelled kayaks, which in turn can make them more portable. (That lightweight material is also what helps make a kayak such as this “foldable” in the first place.) On the other hand, lightweight material can also be blown around more easily by strong wind and waves.

Then there’s the question of how a kayak is made to become portable in the first place. One of the most popular variants of this kind today is inflatable kayaks. The idea behind these is simple: inflate them when you’re ready to use them, and then deflate them and roll them up to take them with you.

However, the Oru Folding Kayak takes a different approach. Instead of inflating or deflating the kayak, this model is constructed with foldable seams that allow you to snap everything into place one way to establish your kayak and then unbuckle and re-buckle everything for transportation. The key here is for those buckles, fairings, and bulkheads to all be exactly aligned and sturdy. If one gives, it can all give, and that’s not something you want to have happen when you’re out on the middle of a lake. For example, many leading foldable kayaks are made from polypropylene.

Some of the most important features offered by the Oru Folding Kayak include:

One of the interesting things about the Oru Foldable Kayak is the fact that it is so light, even for a portable kayak. 20 pounds is incredibly light, which makes this already collapsible kayak that much easier to haul around with you. That being said, the big question with a kayak as light as this is if it can handle rougher waters. As alluded to above, this is one of the biggest questions with all similar kayaks, and the Oru Folding Kayak is surprising in this regard. At first blush, it’s extremely thin walls seem doomed to fail. However, while it may still be blown off course in rougher waters, it holds up better than you might expect.

At 9 feet 6 inches long, this model veers a bit towards the larger side without being so big as to become unwieldy. If this were a two-seater, that would be more than enough space to accommodate both paddlers. However, the fact that this is a one-seated model is something of a double sword; it’s more space for you, but no space for any would-be instructor or friend you might want to take along.

The most innovative feature offered by this model is the fact that it can be folded up and carried with ease. The Jetsons gave us George Jetson transforming his car into a briefcase and carrying it into his office, and while we may not be there yet, it’s at least a reality with this collapsible kayak. What’s more, it’s easier to do than you might think, and Oru offers easy-to-follow videos that can guide you through the process if you have any questions.

In fact, the fact that this model can be folded up as a portable accessory fits its one-seater status nicely. It gives this kayak the aura of a “personal” kayak. Sure, it won’t beat any big-time kayaks in terms of overall performance, but that’s not its target audience. This kayak is geared for those looking for a more personal, portable kayaking experience that is suited for travel (which necessarily calls for kayaks which are easier to carry), and in that regard, the Oru Foldable Kayak does nicely. It folds up into a carrying box measuring 42 inches x 18 inches x 10 inches.

That said, all that portability comes at a price, namely size and weight capacity. The Oru Foldable Kayak comes with a weight capacity of 275 pounds and a recommendation against paddlers much taller than 6 feet, so if you have a large frame, you might find this kayak more than a tad too small.

The fact that this kayak is made from polyethylene which, as mentioned, is highly durable, is a good sign as to this model’s durability. The walls of this model are incredibly thin, but the polyethylene is strong enough to stand up to rough rowing. This model also has 90 liters of storage space, which is surprisingly high for a kayak of this nature.

One of the biggest responses to this kayak is also one of the most important given its nature, specifically, that it’s easy to assemble. It may take a while to get used to, but once you have the hang of it, handling those buckles and snaps should be, well, “a snap.” In particular, users have found it easy to unfurl the kayak and bend the corrugated plastic into place, and have likewise praised the straps that help hold everything in place.

Users have also responded positively to the sturdiness and stability of this kayak. It’s far from the thickest kayak on the water, but it does a good job not tipping over when kayakers enter or exit and doesn’t get soaked or take on water, and that’s what counts most.

That being said, folding up a kayak after a long day on the water isn’t quite as simple as deflating one. Deflating a kayak ideally doesn’t take a lot of physical effort. By contrast, a collapsible kayak still requires you to fold it back up again, and when you’ve spent hours kayaking and your arms are tired, you may not want to work through the precise series of folds necessary for a kayak such as this.

While this model comes with a four-piece folding paddle, it’s far more fragile than the kayak itself and prone to breaking, so you’d do well to bring along one of your own.

This kayak is also more expensive than the most affordable inflatable kayaks. It still beats some hard-shelled kayaks in this range, but this doesn’t mean that this kayak comes cheap, especially for a travel option. On the other hand, the fact it can fold up into a briefcase can make it easier to transport, which may mean that you won’t have to pay for extra luggage if taking it by plane but can instead take it onboard as a carry-on item.

However, if what you’re looking for is an impeccable portable kayak that is lightweight, can fold up easily, and is still incredibly sturdy while out on the water, this may be a great option for you to consider. In particular, its suitcase-style folding design makes it ideal for travel. This makes it a great kayak for casual and more experienced kayakers alike. It won’t surpass a hard-shelled kayak or some high-end inflatable kayaks in terms of overall performance, but then, they can’t beat this model for convenience and portability.