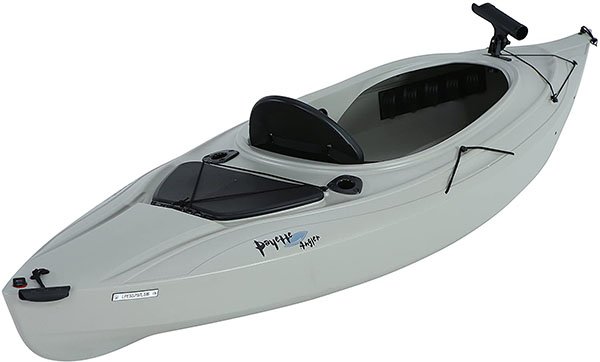 One of the most important things to consider when searching for a kayak is its size. Too big, and you run the risk of overpaying for something that’s too heavy to handle. Too small, and you risk the boat capsizing under your weight or feeling incredibly cramped. Like Goldilocks, you’re often looking for something that feels just right. The exception to that rule is when you know what you’re after in a kayak and want something that’ll fit your needs perfectly both size-wise and otherwise.

Such is the case with the Lifetime Payette 116 Kayak. It’s definitely on the smaller side, but if that’s what you’re looking for, it can still pass the Goldilocks test, feeling just right as a one-seater compact kayak.

The first and most important thing to note about the rigid Lifetime Payette 116 Kayak is its small size. Measuring just 9 ft 8 in., however, it is not nearly as tiny as some of the other “small” kayaks on the market, especially given its one-seater status. On the one hand, if you are looking for a truly compact beginner kayak, you may find this a bit larger than you bargained for. On the other hand, however, this gives you a lot more room to grow into the kayak as you become more experienced.

The idea of a “small” kayak that’s a bit larger and can thus accommodate kayakers as they grow in skill isn’t unheard of. That said, the Lifetime Payette 116 Kayak also has a wide range of other features that help distinguish it, including:

Many of the features listed here for the Lifetime Payette Kayak are pretty standard. One thing that sets it apart from other kayaks of this nature is the amount of space you get in terms of both the cockpit and the storage compartment. You can store a bit more with this model than you would typically expect for a kayak of this size. Even notable is how much cockpit space you get to enjoy.

This kayak is far more spacious and comfortable than many sub-10 ft kayaks, all the more so given the adjustable foot rest and padded seats. All of that taken together makes for a one-seater rowing experience that is much more comfortable and relaxing than others of its kind.

Also worth mentioning is the chine railing, which grants the model extra stability. While the Lifetime Payette Kayak isn’t nearly as large as other models, it is still larger than many “small” kayaks.” Stability is a tricky balancing act for kayaks. Too small and it risks capsizing, but too large and it could unwieldy turn over if you apply too much weight to it. This model strikes a nice middle ground and, even better, the chine railing makes it even more stable than your average kayak of this size.

Another interesting aspect of this kayak is its balanced construction. It is made, like so many hard-shelled kayaks, from sturdy polyethylene, which means that it is extremely durable. What makes this model stand out is the fact that it is both flat bottomed and yet also features chine railing for added support. Chine railing can often be more curved than you might expect from a flat-bottomed kayak, but this model does a good job of balancing those impulses and granting the user a kayak that’s stable on the water while still having the ability to track better than you might expect.

All of these factors make this a kayak that would seem good for beginners, and the user feedback would thus far back up that notion. The kayak has received some more critical feedback, however, for occasional shipping errors that have meant its shipped in colors other than the one ordered by the user. That’s standard enough in the world of ordering packages, however, annoying as that may be, and doesn’t speak to any specific flaw in the kayak’s construction.

A bit more concerning for someone considering this kayak might be the fact that some users have also found the paddles to be a bit flimsier than they would have liked, with some even reporting them breaking. On the one hand, this can be fixed easily enough by buying your own paddles, but on the other hand, surely you’d want the paddles the kayak comes with to work when ordering a new unit.

Thankfully, the model does much better in other categories, notably comfort. Users have given this model a lot of good feedback when it comes to how spacious it is compared to other kayaks. The hull has also received praise for being relatively sturdy.

On the whole, while this model may not be rapid-ready, it is nevertheless solid for beginner and intermediate use.

Some notable pros with this model include:

Some potential cons with this kayak are:

Life is all about managing your expectations, and the same is true of the Kayak Payette 116 Kayak. If you have expectations that this kayak is going to take you over rapids and rough waters with ease, chances are you’ll be mistaken. While this model is a bit bigger than you might expect for a beginner to intermediate kayak, make no mistake that it certainly is.

However, that isn’t a bad thing. On the contrary, as long as you know what you’re getting, this kayak is likely to please. Its durable shell, spacious construction and accessibility all make it an ideal kayak for those new to the pastime.

Considering this kayak’s size, it is also a model that you can grow into as you get more advanced. You may wish to switch at that point given this model’s more basic design, but the larger size and comfortable build make good cases for sticking with this kayak in the meantime.