One of the most important things to consider when reviewing different kayaks is how smoothly they’ll move on the water. It’s one thing to want more space to store your fishing gear or a more comfortable seat, but it’s something different altogether to look for a kayak that actually “feels good” in how it moves on the water. The last thing you want is a bumpy ride or a kayak that drags and is a chore to paddle forward. 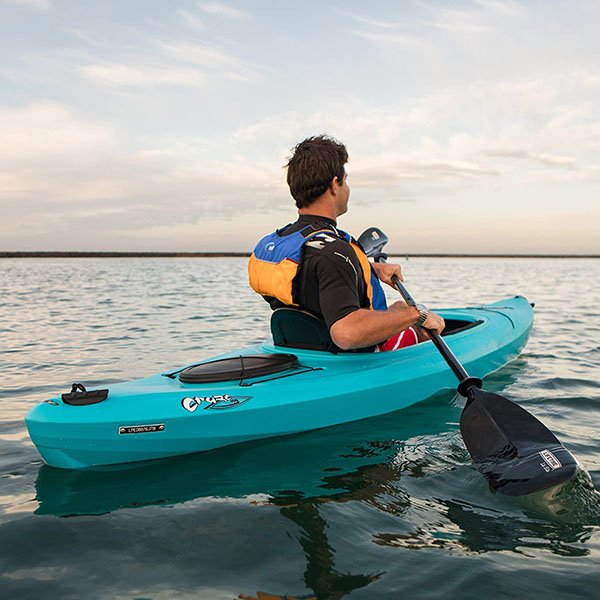 That’s why you might want to cruise along in a Lifetime Cruze 100. Not only is it incredibly affordable, but it also offers some of the smoothest tracking of any kayak of its kind.

Note: As the Lifetime Cruze 100 kayak is currently unavailable in most online shops, we suggest trying out similar rigid kayak, the Lifetime Tandem 10-foot.

It should come as no surprise that its superior tracking and smoothness on the water is indeed the biggest feature this model has to offer. While it has a flat bottom, it is designed in such a way as to allow for the kayak to move along smoothly, if not always speedily. That said, it isn’t too slow, either, and the fact it doesn’t rock and is extremely consistent with how it maneuvers is a huge plus. Part of that has to do with the fact that this model boasts an elongated skeg, which makes it track better.

This model measures 10 ft and weighs in at around 46 lbs, a ratio that is about average for kayaks of this size class. While it isn’t lightweight, it isn’t overly heavy either, and it features front and rear handles, which make it that much easier to transport.

Other vital features to keep in mind with this kaya include:

On that latter point, there is a deep hull at one end of the kayak and an oval compartment at the other, affording this model a ton of storage space for a kayak this size. In addition, as a two-seater, there is more than enough space for two users as well as plenty of equipment. If you are looking for a kayak that can handle a lot of weight and still slip along smoothly atop the water, this is a good choice.

On the whole, most users have responded positively to many of the features already mentioned with this kayak.

For starters, the aforementioned size and accessibility of this kayak has been received warmly, as for many, this is a good example of how a beginner kayak should look like, and how it can be extended to an intermediate model.

Even more glowing has been the feedback surrounding the storage space and overall spaciousness of the kayak itself. If there is one thing you never want to have to deal with from a comfort standpoint while kayaking, it’s feeling cramped. Not only is that extremely uncomfortable, but the inability to move freely could cost you precious space and impact your reactions, which in turn could lead to you paddling badly and thus accidentally turning the kayak improperly, or worse.

Thankfully, this model does away with all of that with its emphasis on comfort. You can change the position of the footrests to give yourself more space, the seats are padded, and you have plenty of room in which to store various belongings without feeling cramped.

Above all, users have liked the way this model tracks on the water. The chine railing and elongated skeg do just what they promise, allowing users a smooth trip on the water.

Some of the best things about this kayak are:

Some potential downsides to keep in mind include:

There is a lot to like about the Lifetime Cruze 100, with the most important by far being how well it tracks along the water. This is one of the most important qualities to look for in a kayak, and it can be surprisingly difficult to find, especially in one of this nature. A kayak, as with any product, is built with an audience in mind.

Is Lifetime Cruze 100 Kayak Worth It?

While beginner kayaks need extra stability as they learn to paddle, it can be difficult to find that in larger models in particular. That’s part of why this model stands out as much as it does – it’s a beginner-friendly kayak that tracks as smoothly as you would hope from a more advanced model.

There is also a lot to be said for how comfortable the Lifetime Cruze 100 is. Again, this is something that a beginner should hope for, but doesn’t always get given the fact that most beginner kayaks are smaller than this model. With that smaller size often comes a more cramped kayaking experience. As a result, there is something to be said for the more spacious experience afforded by this kayak. There is plenty of space for both yourself as well as a partner, which can be helpful if you want to have someone along to teach you how to paddle and handle things as you start to experience the world of kayaking.

The reports of cockeyed seats are a bit concerning, but they’re rare enough and should be easy enough to fix if that does occur. On the whole, it does not obscure the many good things that this kayak has to offer.

If you are looking for a kayak that’ll let you cruise along the water with ease, this kayak is definitely one to consider.