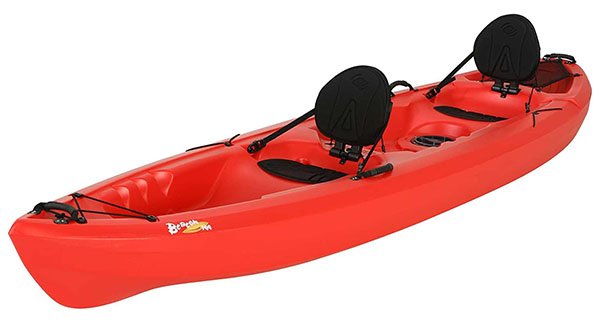 Nothing sells a product faster than the ability to share it with friends. A video game’s solo or story mode may be great, but it’s multiplayer that really sells it to a mass audience. A film or TV show may be critically acclaimed, but it’s film festivals, movie nights with friends, and sharing clips and memes on social media that really makes them become a cultural force. The same holds true of equipment for outdoor adventuring, especially those most conducive to experiencing those adventures together, such as kayaking.

However, not every kayak is conducive to cooperative adventuring. Many are too small or narrow to seat multiple people and are strictly solo kayaks. By contrast, the best thing about the Lifetime Beacon Tandem Kayak (aka the Lifetime 12 Kayak) is that it’s big enough to house two or more passengers as they hit the water together.

Note: As the Lifetime Beacon Tandem kayak is currently unavailable in most online shops, we suggest trying out similar rigid kayak, the Lifetime Tandem 10-foot.

The biggest feature offered by this model is without question its immense size. At 12 feet long and 35 inches wide, it is a nice big kayak that offers a ton of space inside. If you’re tired of feeling cramped in smaller kayaks and want room to stretch your legs or store more equipment while out on the water, this may be a good kayak to consider. That said, with that added size comes a good deal of added heft, and at 84 pounds, this model definitely can’t be considered “light.” True, it’d be unrealistic to expect a lightweight kayak that size, but it is still worth keeping in mind.

That size feeds into some of the other features of the Lifetime 12 Kayak, including:

Here you can check the kayak “real-life” on the water:

One of the most acclaimed aspects of the Lifetime 12 Kayak is its storage capacity. All that extra space afforded by this immensely spacious unit makes for plenty of room in which to store gear, especially given that you get both a storage hatch and a cargo net. Users have found this more than enough room to store plenty of gear for fishing and other activities.

In addition, users have tended to appreciate how well this model tracks on the water. Some might find that surprising given how heavy this model is, but that just makes it all the more impressive that it’s able to cut across the water as smoothly as it does.

All that weight doesn’t go unnoticed, however. Users have definitely noticed how heavy this kayak is, which can make moving it to and from the water a schlep. That said, one nice thing about having a kayak this big is being able to share it with others, so if you are hitting the water with family and friends, you should have plenty of extra hands to help you haul it out there.

That being said, it isn’t all sunshine and roses for the Lifetime Beacon Tandem Kayak. By far the biggest issue users pose is durability. Multiple users have reported opening the package in which it was shipped to find their new Lifetime Beacon Tandem Kayak dented or even punctured. While you might be able to put that down to a shipping issue, this has happened to more than just one or two people. What’s more, when you receive a kayak in the mail and it arrives already banged up, it raises serious questions about its long-term durability. That is especially surprising given the high-density polyethylene build.

Still, for most users, this question of durability has been dwarfed by the sheer size boasted by this model. It is big enough to accommodate two people easily and can potentially hold more and even some pets, depending on their weight. With a 500-pound carrying capacity, this model can hold more than a lot of other kayaks in its price range.

Armed with the information from above, let’s summarize it into pros and cons.

Is Lifetime Beacon Tandem Kayak (aka the Lifetime 12 Kayak) Worth It?

There is a lot to recommend this model. It’s huge, is comfortable, comes with lots of storage, is steady and tracks well out on the water, can hold tons of people, and more.

The big question is whether all those platitudes plateau or go downhill when faced with the prospect of its potential fragility. To be fair, it’s worth noting that some users reporting scratches, dents, and holes in packaging isn’t the same as users saying that the kayak experiences durability issues on the water. Still, it’s something to be aware of and it is a question mark that lingers.

Even so, there are so many factors that recommend this model that it is hard to ignore them. As long as your kayak arrives in the mail and doesn’t boast any premature problems, chances are that it will be fine and could be a fantastic investment for years to come.