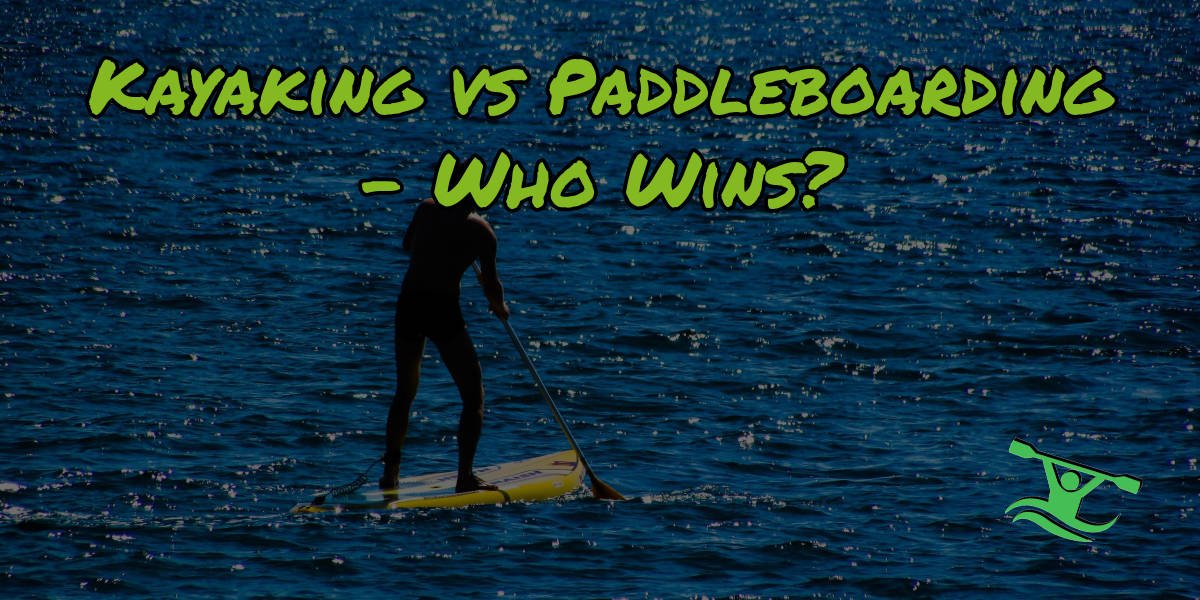 Kayaking is a great hobby to be a part of. There’s a community, both in real life and on the internet. It’s endlessly variable – paddling the same stretch is never the same no matter how often you do it. It can be relaxing, exciting, hair-raising. It’s fantastic.

I’d noticed a lot of people talking about paddle boards recently. Actually, I say recently – I think I first heard about it several years ago and I’ve successfully ignored the phenomenon until pretty recently. Anyway, I guess it got to a sort of critical mass, and I began to have the urge to check it out.

I’m just going to do a sort of side-by-side comparison of kayaking and paddleboarding here. They’re two completely different sports, but you might feel as though you want to cross over to see what’s different. Or perhaps you’re wondering, should I buy a kayak or buy a paddle board? Hopefully, I’ll figure it out by the end of this post.

What is a Paddleboard?

A paddle board is very much like a surfboard – in fact, paddle boarding seems to have originated among surfers. In Hawaii, surfers used to use a paddle to improve their manoeuvrability on the board and catch better waves. About ten years ago or so, it seems that the idea became very popular as a way of having some fun when the surf wasn’t up to much.

The big difference is that SUPs (stand-up paddle boards) are usually somewhat bigger than surfboards, and often have padded decks and a carry handle.

A paddle board is usually made of fibreglass for durability and polyurethane or expanded polystyrene foam for buoyancy. They are usually at least 9-feet long but can be upwards of 12-feet. You can also get inflatable paddle boards – the amazing thing is that if you consider a surfboard, it’s really very rigid. How can an inflatable paddle board compare to that? The answer is that they are relatively high pressure, compared to your usual inflatable kayak, and use special construction techniques such as drop stitching to improve their rigidity.

Some inflatable kayaks come with a high-pressure, drop stitched floor to improve their rigidity too – they can be almost as solid as a fibreglass and plastic board, but much easier to transport.

How Does a Paddleboard Compare to a Kayak?

The obvious difference is that whereas a kayak looks like a more traditional boat, a vessel you might say, a paddleboard is just that – a board, a plank. Nothing is separating the paddler from the water but this platform.

A SUP is a pretty versatile craft, but it isn’t as good at handling rougher water, unlike a kayak. I suppose standing up lends you a much higher centre of gravity than sitting down, as you would be in a kayak, which makes you much more prone to falling off.

Of course, after falling off a SUP (or jumping off on purpose), you can easily get back on. Although they’re pretty stable and resistant to capsizing, you can flip a SUP back over more easily since they are lighter than a kayak; they are more easy to get back on to as well.

Another major difference is that a SUP offers no protection from the elements whatsoever. You might as well just be standing on a board in the middle of the water. Well, in fact, you are. This means SUPs are better for calmer waters and clement weather. Add to this the fact that a SUP offers no storage space, whereas a kayak can have ample room, and you’ll get the picture of a craft that in my opinion is a great bit of recreation, but has a completely different use to a kayak.

What Can a Paddleboard Do That Kayak Can’t And Vice Versa?

A SUP isn’t useless, by no means – I don’t mean to be down on them. They are light and easy to transport, and if you choose the inflatable style they are even lighter and easier – you can certainly put one in the trunk of your car “just-in-case” on a camping trip. Also, for the past several years fishing from paddleboards is being a great relaxing hobby.

A SUP also, in my opinion, makes for a much harder workout for a similar amount of activity. I guess this is because you are sitting down in a kayak, whereas you’re standing on a paddle board. This means you use your legs and core more (not that they are inactive during kayaking) – I guess your overall position is just a bit less efficient for paddling. It’s kind of like shovelling actually. Imagine you’re digging a big hole, and you’re almost there.

When it comes to sightseeing, I think the kayak would win because it is a bit more resilient and a bit more capable. You can get almost anywhere in a kayak, and it may just be my lack of experience on a paddle board, but I don’t think I would be happy going exploring a coastline on one. Not just a case of the capability of a SUP to physically get places, but also the lack of a lifeline in terms of supplies, a place to store a dry bag with a phone, and so on; it just makes me a bit nervous is all.

For me, a SUP is a great toy to have in your toy box, but it obviously isn’t a replacement for a kayak. For a bit of fun on the water, a paddleboard is difficult to beat on the barrier to entry, ease of use and speed of deployment.

They also look pretty stand-out – people notice you and go “Hey, cool!” (if that’s what you like).

If you want a harder workout, if you like standing, and if you just want an easy option to go play with immediately, a SUP is a great consideration. I am thinking of getting one of my own this summer.

But if not, maybe if the water is a bit cold, or the wind is up, or if the waves a too big and scary for me to think about paddle boarding; if I want to go a longer distance, get there faster, or carry my camping gear down river with me; maybe if I want to do something more involved, I will take my kayak.