There is nothing quite like a day on the water, and no way to enjoy it that quite rivals a paddleboard. The water conveyance has seen a steady climb in popularity over the past few decades from a mere novelty to one of the most prominent watercraft out there. 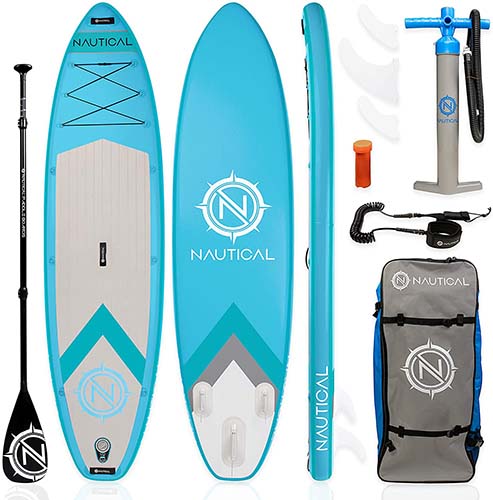 When choosing among different paddleboards, therefore, you want to choose an option that is worthy of that long climb up through the ranks.

Enter the irocker paddleboard. It boasts a lot of the virtues that have made paddleboards an increasingly popular commodity over the past decade-plus, and it isn’t hard to see why.

What To Expect From A Paddleboard?

Before we get into the specifics of this product, let’s dig a bit deeper into what makes a paddleboard and, in particular, an inflatable version work.

Paddleboards occupy an interesting place between surfboards and boats.

Like the former, they feature long, thin boards that are meant to be stood on. Unlike surfboards, however, paddleboards can also be ridden in a seated posture and are amenable to yoga and other exercises. While you can sit down for a few minutes while paddling toward waves on a surfboard, paddleboards allow for a wider range of poses and, thus, possibilities in that regard. At the same time, true to its name, paddleboards also feature paddles, allowing you to paddle toward the water with them rather than your own two hands.

Paddles aren’t the only things that paddleboards have in common with boats. They increasingly have higher weight capacities which, like inflatable boats, means they can be employed in a wide variety of watery settings. At the same time, they also carry the same concern people have had about inflatable boats for decades – namely, the fear that they might pop. On the one hand, that fear seems to make sense on the face of it. After all, the last thing you want when out on the water is to spring a leak – let alone while being buoyed by a craft that costs you hundreds of dollars. On the other hand, however, these fears are, if not necessarily a thing of the past, so greatly mollified by the advances in the PVC materials from which inflatable boats and paddleboards are made that they are no longer a primary concern. You can now purchase a paddleboard and paddle on without fear that it will pop.

With all of that out of the way, let’s take a closer look at some of the primary features included in this iRocker paddleboard:

While owning a paddleboard is a great gateway to all manner of fun and games, one “game” you never want to have to play is excessive weight management. Only you know what you plan on bringing out on the waves with you, but if it’s too much, it can send your paddleboard plunging beneath the depths. You naturally don’t want that to happen, which is why it is best to opt for two things in a paddleboard – high weight capacity and weight-saving measures at every opportunity. This model from iRocker certainly delivers on the second, with it being engineered from head to toe to be as light as possible. Remember, every little bit of weight counts, and the fact this model makes use of a lightweight fiberglass paddle can help you save a few precious pounds. In addition, it can be converted into a kayak paddle if you choose to purchase an additional optional kayak blade.

Here you can check an awesome video overview of iRocker’s 3 famous models (by SUPboarder):

As for this model’s size, it is certainly a larger paddleboard at over 10 ft. In addition, it has a carrying capacity of 240 lbs – not as much as some other options on the market but still respectable. Taken together, these two figures point to one thing – this is a paddleboard that can handle larger riders. That’s good because far too many paddleboards go the other way. As mentioned, weight management is a big consideration with paddleboards, and far too many people think that they cannot find a board that will support them. However, boards such as this unit from iRocker show that that is simply not true. This model has enough weight capacity and is long enough to support most riders. In fact, it can even support a combination of some riders and their dog or small child.

Why might the latter be important? Because some people enjoy doing yoga and other meditative activities out in the water, and the iRocker paddleboard makes that easy with not just its size and well-balanced nature but the inclusion of an EVA mat. This allows riders to sit and balance on the board with ease and comfort.

Of course, one of the main things to figure out with any inflatable unit is how it is to be inflated and deflated in the first place. The iRocker inflatable paddleboard accomplishes this with a combination of 13 D-rings and a single chamber dual action pump. Whether or not you decide to actually use the pump or would rather use your own, this combination helps ensure that the unit doesn’t take too much time inflating or deflating.

Another nice touch offered by this paddleboard is the inclusion of another inflatable boat and kayak mainstay, bungee cords for storage. If you have ever gone on a fishing trip, you know how important it is to have this extra storage space. Filling up your fishing boat can quickly evolve into the least fun game of Tetris ever, the same way weight management with paddleboards isn’t a game you want to play. Bungee cords can help resolve this by giving you an added space in which to store things.

One of the big knocks on old inflatable paddleboards and boats was that they could not track as well as their hard-shelled counterparts. While the latter still hold the edge, inflatable models have spent years trying to close the gap. Another interesting quirk included in this model, therefore, are three fins that can be removed or attached as desired. Stick these fins on, and your board will be able to track a lot better than it might be able to otherwise.

A post shared by Chris Dunn | Stand Up Paddle (@dunnonsite)

Another important feature here isn’t anything to do with the board at all but the manner in which you carry it. Convenience is always an important part of any consumer experience, which is why this model from iRocker comes with a convenient carrying bag. This can make it much easier to carry the board to the water or take it away again once you’re done – especially when compared to hard-shelled boards. These are as big and heavy as they are, meaning you’ll have to schlep them to and from without any relief. With the combination of this model’s inflatable and deflatable nature and the carrying bag, this board, like many inflatable options, is a lot more portable.

All of this is, of course, predicated on the supposition that your inflatable board won’t pop and plop you into the drink, as it were. That’s why the iRocker inflatable paddle board features sturdy military-grade drop stitching. This is the industry standard among inflatable boards by now, so it’s good to see it here.

Some of the best features included in this iRocker inflatable paddle board are:

Some aspects of the iRocker paddleboard you might be concerned about are:

As mentioned above, there are several key positive facets of this paddleboard. The fact that it is so wide means that, in the right water conditions, it can be quite stable. However, the keywords there are the “right conditions,” since some users have found that it is best suited to lakes and doesn’t do well when faced with choppier, windier waters.

At the same time, the comfort level offered by this model is acclaimed by customers. That EVA mat and the overall nature of the board make it a very comfortable as well as durable and portable board.

The pump hasn’t been received well by everyone, but again, that’s more of an added extra than a prime feature.

The iRocker inflatable paddle board does a good job of providing a mostly stable and comfortable ride. You can inflate and deflate it with ease. It is also incredibly easy to take everywhere thanks to the combination of its deflatable nature and its easy-to-use carrying case.

Last but not least, this board is big enough to support most riders without them fearing that they might accidentally fall off.

All of these factors combined make this a savvy pick for those looking for a solid, sturdy all-around inflatable paddleboard.