The bond between a boat and its crew is a special one.

From Jason and the Argonauts aboard the Argo to Captain Ahab and the crew of the Pequod hunting Moby Dock, Helen of Troy as “The Face That Launched a Thousand Ships” to Sinbad the Sailor in the Thousand and One Arabian Nights, Coleridge’s “The Rime of the Ancient Mariner” to Hemingway’s The Old Man and the Sea, our global heritage as sea-loving mariners is as ancient and expansive as the sea itself. The history of our time on the waves has been marked by one breakthrough in nautical technology after another, and while inflatable boats may not help you “sail beyond the sunset and…all the western stars” like Tennyson’s Ulysses, they can allow you and your family and friends to chart a course toward fun and memories that will last a lifetime. 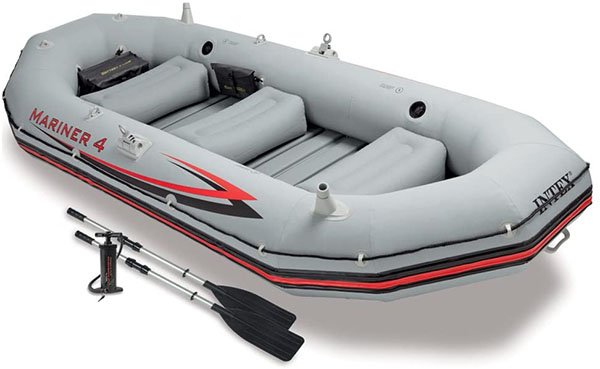 Enter the Intex Mariner 4 inflatable boat. How does it fare, and should you trust it to ferry you and your friends on your next watery adventure?

What to Look for with Inflatable Boats

One of the most important things to check out when deciding whether to buy any inflatable boat is the material from which it’s made. Unless you want your inflatable boat to pop like a big water balloon, you need to make sure that the inflatable material is sturdy. Among modern inflatable boats, that has typically meant either PVC or Hypalon are made. Of these options, PVC is the more popular choice. It is lightweight, typically more affordable, easy to fold and roll up, and advances in polymer technology have made this material even stronger in recent years. By contrast, Hypalon is heavier and more expensive. However, it is also quite durable, and PVC has the downside of potentially starting to degrade if it is left exposed to sunlight, humidity, and general heat too long. However, better UV protection for PVC materials have helped mediate this concern and made them the favored option as of late.

Another thing keeping inflatable boats afloat are their many chambers. This way, even if you do experience a puncture in one part of the hull, the other chambers will ensure that your boat stays afloat. You’ll thus want to see how many chambers an inflatable boat offers – typically, the more, the better.

You’ll also want to see what kind of accessories, if any, come with the boat. Most inflatable boats will offer at least some kind of package that can include anything from extra oars or seats to a repair kit to a carrying bag and more.

Then there’s the size of the model. You need to make sure that the boat is big enough to accommodate not just yourself and however many guests you plan on taking along for the ride, but also all your gear. Don’t forget to include the weight of your gear when considering the weight capacity and spaciousness.

Inflation and deflation time are also important. You don’t want to spend too long doing either, so the faster you can inflate and deflate your boat, the better.

Finally, there’s the comfort factor. You’re likely going to be spending hundreds of dollars at least, so you’d better make sure that you’re nice and comfortable.

Some of the most notable features offered by the Intex Mariner 4-Person inflatable boat include:

That last point should tell you all you need to know about the level of quality on display with this model. Few models are good enough to meet the standards of the US Coast Guard, so the fact the Intex Mariner 4-Person inflatable boat does is a big point in its favor.

You can check a good feature overview video here:

There are lots of other areas in which this model performs well, starting with the fact that at over 10 ft it’s nice and large. Seventy-eight pound isn’t lightweight, but for an inflatable boat this big, it isn’t too heavy, either. The three sectioned out inflatable thwart seats give you plenty of room as well.

The PVC from which the hull is fashioned is quite durable, and does not puncture or tear easily. As mentioned above, that’s essential for any inflatable boat. This model’s PVC appears to be particularly durable. One big problem with inflatable boats and kayaks has long been the fact that they just weren’t suited to the jagged rocks and rougher waters or river rapids and similarly rough rides. This model may not be ideal for that, but it’s better than many other inflatable boats in that regard.

It is able to maintain that durability while still remaining pretty comfortable as well. The inflatable PVC material is rigid and sturdy enough to put up with some punishment while still having enough give in the seating area to allow you and your friends to kick back and relax.

As you can guess from the name, this boat has space for four people, and with a weight capacity of at least 800 lbs (and potentially more, depending on the model), this is a boat that can handle a full crew and plenty of gear with ease.

There is plenty of storage space on board as well, which helps add to one of this boat’s biggest plusses – its potential for fishing. The storage space combined with the comfy interior and fishing rod holders make this a great choice for anyone looking to cast off before casting a line.

The five inflatable chambers included in the Intex Mariner 4-Person inflatable boat is another huge point in its favor. Five chambers should be more than enough to keep your boat afloat.

Let’s check the likes and dislikes of the Mariner 4 owners.

On the other hand, users have been less enthusiastic about the included oars. While there isn’t anything wrong with them, per se, they aren’t the best oars out there, and while they’re decent as an inclusion in case you don’t have any, if you do have your own oars, you’ll likely want to use them rather than these.

Users have also been pretty enthusiastic about the motor mount. The fittings and motor are easy to fit into place, making it that much easier to jet off wherever you want to once you get the engine going.

Owners have also spoken highly of the boat’s overall construction. As mentioned, it features sturdy PVC material, and reviews thus far have spoken highly of its durability. The same can be said for its comfort, with most finding the inflatable seats in the boat pretty nice. Occasional leaks have been reported, but nothing serious that would jeopardize your time on the water. Leaks are bound to happen with any inflatable boat, and you shouldn’t have to stop to fix anything until after your trip is done.

Reviewers have also been kind to the rotating oar locks, which make it that much easier to set your oars in the position you want them before you start rowing.

While this model does come with a carrying bag, it is still on the larger side and thus not the easiest inflatable boat to take along with you, especially given its weight at 78 lbs. Users have recommended bringing a couple of extra bags to carry all the extra accoutrements along as well, which is sound advice, but will only add to the schlep-factor for this model.

Some of the biggest pros offered by this model are:

Some potential cons to consider with this model are:

Is the Intex Mariner 4 Inflatable Boat Worth Your Money?

The Intex 4 Mariner inflatable boat does a great job of ticking many of the boxes you’d expect from a quality inflatable boat. It is durable, spacious, and quick and easy to deflate and store.

If you’re a fishing fan a la Hemingway, this boat’s fishing-friendly features and durability could make it a great one to consider In Our Time and for some time to come.

On the other hand, if you’re looking for A Moveable Feast and an equally-portable boat, the 78-lb frame and 10 ft-plus size may be a bit much.

Even so, whether you’re looking to catch fish off the Florida keys, cruise off the Spanish coast and the South of France, or anything in between, the Intex Mariner 4 is a great for those looking to write the next great fish story with friends and family.