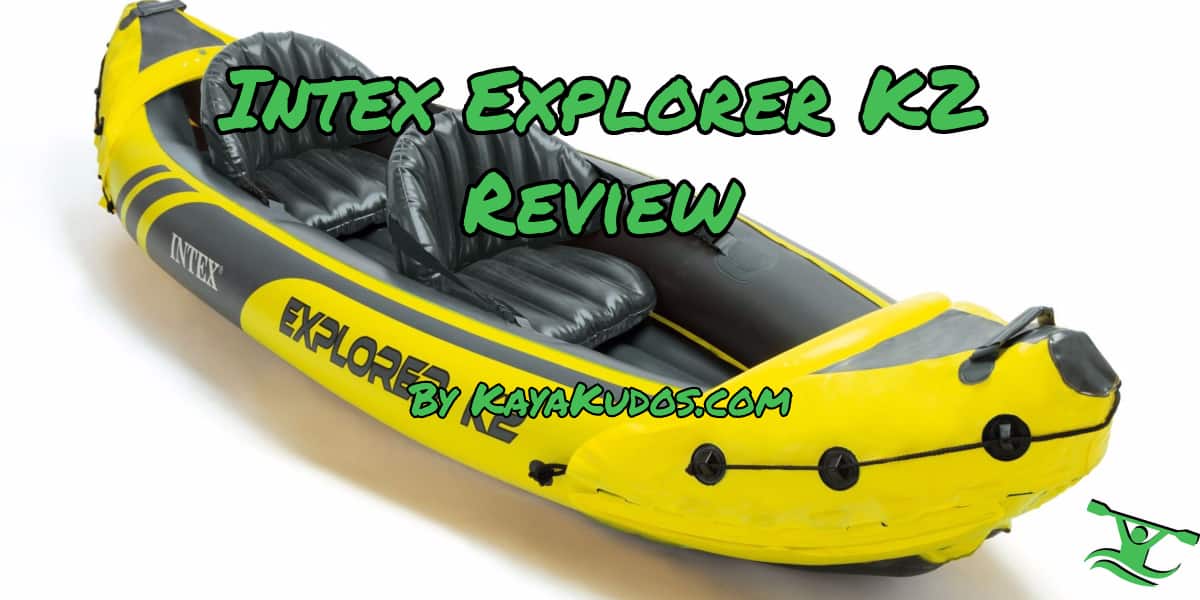 Intex Explorer K2 is a very well-known kayak, possibly one of the best inflatable kayaks currently on the market. In our review, we will check its features, pros and cons and conclude if it’s indeed worth your money.

I love being on the water. The first time I sat in a kayak I was about eight years old. Since then, I’ve spent lots of time on, in and under water. I’m a confident swimmer too, and soon totted numerous badges and certificates to prove I’m more or less semi-aquatic, and that I can handle a kayak. I’ve worked on a few big boats and own a few small recreational ones. I’ve also helped teach kids how to paddle out on the open sea, the Scottish North Sea where it gets seriously rough.

If you need additional guidance on choosing the best inflatable kayak click here.

Why Buy an Inflatable Kayak?

Why buy what is essentially a rubber dingy? Especially when I own a sit-on-top made from indestructible material, one designed to catch surf, fun enough already. Surely there’s no place for an inflatable kayak? Well…

For starters, my sit-on-top, although it weighs only 21kg, when it’s got my gear in it feels heavy – even using the expensive trolley I bought to drag it! Besides, it’s only for one person and I was fancying something bigger, if only to carry more gear.

Ideally, I wanted something I could just grab and go, and my arms not be tired before I even picked up my paddle. Inflatables are usually lighter. But I was a little nervous about the inflatable aspect. Titanic-nervous. “Won’t this thing just burst as soon as it hits the shingle?”

I needn’t have worried.

Why the Intex Explorer 2 Caught My Eye: Safety First

It wasn’t its bright-yellow, sporty good looks or the price which caught my eye, though there’s no denying both got my attention, the very low price tag was intriguing. But the inflatable aspect niggled me: it’s not that I don’t have faith in inflatable boats, the life boats of the RNLI in the UK and plenty of other people use semi-rigid inflatables (RIBS), but there’s a big difference between those and a blow-up dinghy you see next to the kiss-me-quick hats at seaside shops. My concern was, in the advent of all things becoming inflatable these days, blow-up kayaks might be a fad, and using one could go one way or the other.

It Comes With Great Credentials

But this one is certified by two different bodies I know carry some weight, and that’s when I looked at everything else it had to offer. In no time, I was ripping the packaging off my very own. Straight out of the box, it was good to go with everything I needed, including a puncture repair kit. It weighs nearly half what my other does and cost three times less. It’s also half the price of similar models. It felt like Christmas came early and I was eight again.

Really – this is value for money.

It’s marketed as lightweight but robust, and says it would paddle easily, which I read as paddle ‘okay.’ I wasn’t under any illusions that it would handle like a sea kayak. It’s not marketed, designed or priced like one, either. Simply put, it’s marketed as a recreational kayak for taking out on lakes and rivers where the conditions are better, where there are fewer risks like high winds carrying you away on the tides and freak waves capsizing you.

If you’re looking for a cheap alternative to a regular kayak to use for fun trips out alone or with someone, but one which you alone can carry easily, feel safe in and actually be able to paddle straight, then you might feel like you’ve got a pretty good bargain here. It’s not marketed for children, they’ll need an adult present. And like I mentioned, it’s not built for the open sea.

It seems the tides have changed for how manufacturers are making inflatable kayaks. Like how the digital age has brought us gadgets we could only once dream of, technology also allows companies like Intex to produce quality models like the K2, giving everyone a chance to own a kayak – which I think is pretty cool. Here’s the full spec:

Intex boast about lots of features on their Sports Series Explorer K2, and the credentials look and sound impressive. Almost every retailer gives the same manufacturer description, so I’ll cover the basics, run through what’s important, plus explain what the jargon actually means, if it’s just fluff.

What the Intex Explorer comes with:

Material: SUPER-TOUGH™ 30-guage vinyl with a 1200+ denier nylon shell. It’s made out of the same high-quality material typical on inflatable boats costing hundreds more. I haven’t tried to test how tough it is, but it bounces off pebbles.

Separate air chambers. Just like proper boats are built, there are separate chambers, so if you get a puncture, you’ll stay afloat until you can repair it.

Grab-lines. Grab-lines on the stern and bow (front and back) make carrying, dragging or pulling a lot easier, but I wouldn’t push my luck with their durability.

Boston valve. Standard on most inflatables, a one-way valve designed to let air in but not let any out. If you’ve ever raced to get the cap on before the air hissed out, it wasn’t a Boston.

TUV approved. TÜV SÜD certification means a lot in the world of boat safety. The company behind the acronyms is German, and they’re recognized internationally for their high testing standards. Big thumbs up.

NMMA Certified. NMMA certification means it passes the standards set by the US Coast Guard. They say that compared to uncertified vessels, boats meeting these standards are seven times less likely to fail any on-the-spot safety inspections.

In an ideal world, everything would be perfect. The paddles would be adjustable and in a color I like, etc. But for the price, I think it already offers more than its price tag commands. It is excellent value for money. Is it like paddling a regular kayak? Yes and no, you’ll have to decide for yourself. Don’t forget, this kayak can fit two people and even a dog!

The Intex Explorer is easy to paddle and lots of fun, just like it was designed to be. It handles well enough when the water gets a bit choppy, but how much it can handle will partly come down to your paddling skills. So prepare to get wet, and wear a buoyancy aid.