Inflatable kayaks are always an interesting purchase, in no small part because of the balancing act that is inherent to their nature. On the one hand, because they are inflatable, they tend to be lightweight and easy to move from place to place, but also face an increased risk of potentially being punctured by jagged rocks or other sharp surfaces. On the other hand, because they are kayaks, they are expected to be able to allow users to go fishing, paddle out on streams and rivers, and engage in any number of activities allowable thanks to a sturdy hull. 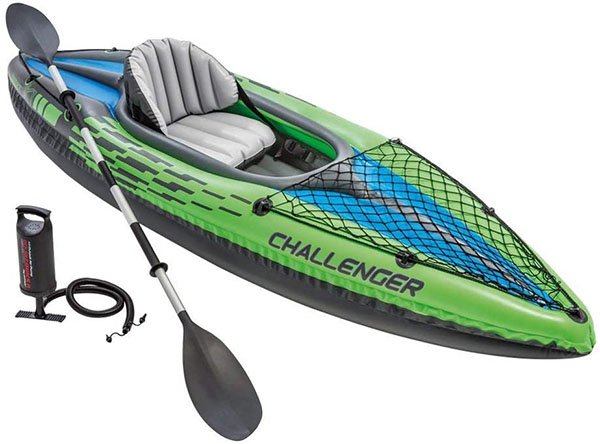 The Intex Challenger K1 is a perfect example of how this evolution is occurring. It marries many of the best qualities of hard-shelled and inflatable kayaks alike into an option that’s easy to inflate for a great time on the water before deflating and packing it up with ease.

Before we get into the product features for this model, let’s add a bit of context – what are the things you care most about when searching for an inflatable kayak? How does that square with guides of what you should be searching for?

As alluded to in the opening, there are distinct pros and cons to inflatable kayaks, which in turn inform the product features list for options such as the Intex Challenger K1 as they try to expand upon the former and confront the latter.

Some of the best features of inflatable kayaks tend to include:

Some disadvantages inflatable kayak makers have to work around include:

So how does this kayak from Intex square up to all that?

Pretty well, as it turns out.

Among the features included in this model are:

A lot of the features included in this Intex are geared toward maximizing those aforementioned advantages while trying to solve some of the vulnerabilities inflatable kayaks face.

For example, those Boston valves are a direct response to the tendency for inflatable kayaks to take too long to inflate and deflate. While it may seem like a small thing if you are new to kayaking, experienced kayakers will know that after a long day out on the water you’re tired, and you don’t want to have to deal with a long deflation process. This Intex does a great job of addressing that potential weakness and turning it into a strength by including Boston valves, which make it easier than ever to simply pack up and leave after you’re finished.

The size is another interesting piece of the puzzle. Nine feet long is not too long at all, and 27 lb is pretty light, which means that this kayak should not be overwhelming, thus making it easy for beginners to use.

The layout of this kayak is interesting, with it boasting a narrower design than some other models with the stern and bow being somewhat more closed as well. This helps reduce the amount of spray water that fills the boat, which is a problem all kayaks have to deal with. While this can be somewhat challenging for taller people, since this limits the amount of space inside, it does mean that those who fit may enjoy a more comfortable kayaking experience as they don’t have to worry as much about getting wet.

This model from Intex also takes on the idea that inflatable kayaks are less stable and can be buffeted by the waves via its inclusion of a removable skeg and I-beam. The latter adds some much-needed rigidity to the kayak’s structure, helping prevent it from being pushed around by rough winds and rains. The former helps the kayak track better in the water. While other inflatable kayaks may have a better skeg setup, it is still a welcome inclusion here that boosts performance considerably. That said, this kayak still does best in still water, and isn’t made for white water rapids or anything like that.

The cargo net means that there is plenty of storage space.

The construction of this kayak speaks volumes about just how far inflatable kayaks have come. Once, inflatable kayaks felt like balloons floating on the water just begging to be popped. By contrast, this vinyl material from Intex is incredibly durable.

The removable seat is a nice touch to try and alleviate any space issues which may exist for taller kayakers.

Finally, this kayak is definitely on the affordable side, making the Intex Challenger K1 a bargain for those looking not just for a good inflatable option but a quality kayak in general.

A post shared by Daniel A. aus H.?? (@daniel_goes_outside)

The feedback from users on this kayak has largely been positive, with most pointing out how well it meets or exceeds the expectations for a modern inflatable kayak. While users have been quick to point out that it doesn’t track as well or provide the same kind of stability as many hard-shelled models, it nevertheless is speedy, maneuverable, and comfortable enough to recommend over other inflatable models. That’s especially true given its price point, which many users have seen as one of the key elements in putting it over the top. There are plenty of good inflatable kayaks today, but this is easily one of the more affordable ones.

Here you can check a video overview of the test drive by magic76767676:

The fact it can be easily deflated and carried away is another favorite, with many users noting how portable it is.

One interesting point of contention is over how spacious it is. On the one hand some users have, as mentioned, noted that the kayak can feel cramped for those 6 ft and up. That said, the removable seat can give you some more room if you really need it, and there should be more than enough room for short and medium-size kayaking adults and children.

Finally, some have taken this kayak down as a good one for beginners. Not only is it affordable (always a good thing for beginner products of any kind), but its lightweight and narrow setup, while a potential minus for taller kayakers, is a plus for those looking to learn, since these features can make learning to paddle much easier.

Some of the best features with this kayak include:

A couple of potential downsides with this kayak are:

Is Intex Challenger K1 Worth Your Money?

Inflatable kayaks are always a balancing act, and the Intex Challenger K1 does a good job of striking that balance between lightweight features typical of inflatable kayaks and providing the kind of sturdiness and answers to the drawbacks of such kayaks, which strengthens its potential.

Add to that the fact that this is easily one of the most portable and beginner-friendly inflatable kayaks out there, and it’s fair to say that, on balance, Intex’s kayak tracks pretty well against the competition.