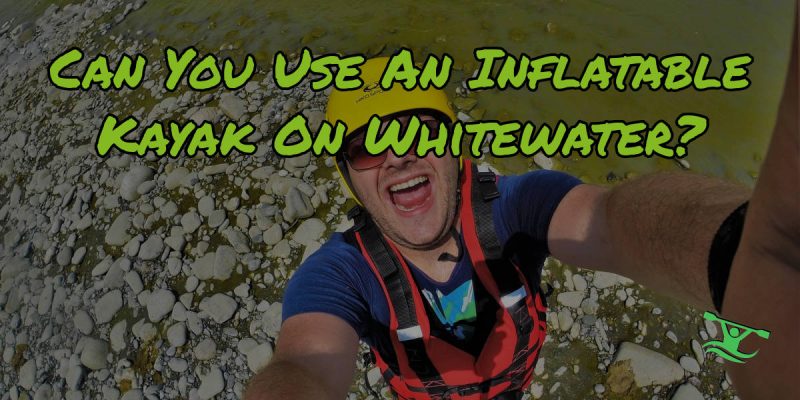 People can be very sniffy about inflatable kayaks. That’s how you know that they have never tried a really good inflatable – they’ve probably messed around in a pool toy, or a lilo, and left it at that.

The truth is that these days blow up kayaks are actually really high-performing pieces of equipment. They can handle all sorts of conditions, and they come in a range of styles and qualities in order to suit any budget.

You can spend anywhere between $100 (maybe less, even) and $2000 (perhaps more) for an inflatable kayak, and you actually do get what you pay for.

Of course, the consequence of this is that for more challenging conditions, you need a more rugged boat – and you’ll probably pay more money for it.

So what do you need in a whitewater-ready kayak?

There are several things that are common to whitewater kayaks; I’ve written about all of these before so be sure to check out my other pages.

Essentially, the design of the hull of a kayak strongly influences its performance on the water. The major features you will find are:

Depending on the style of whitewater kayak you get, you’ll probably find the hull of your yak is something of a compromise between the two, so you can head downstream without spinning in loops, but also manoeuvre rapidly when you need to. 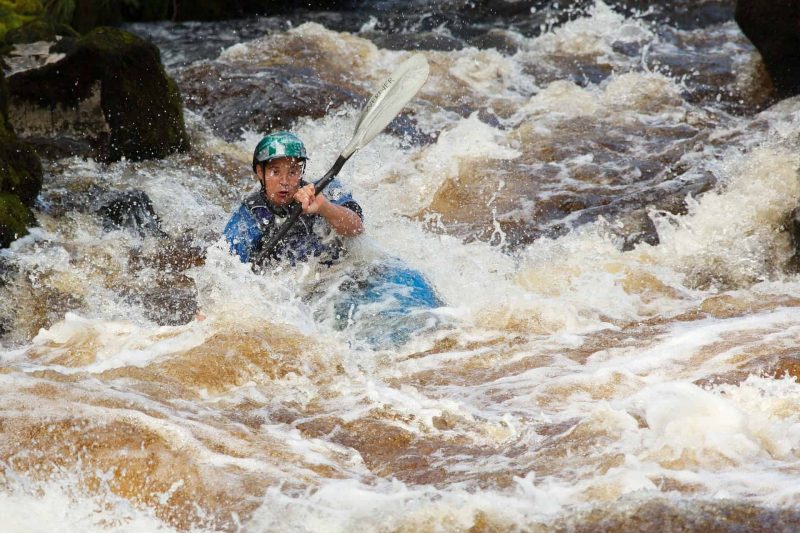 Chines are the edges of the hull under the waterline. If you imagine the displacement hull above as being a nice constant curve, like a U, that is “soft chined”. But if it is More like a V or _/ then that is “hard chined”.

The harder the chines, the more the current affects the movement of the kayak; however harder chines also lend themselves to higher performance turns, and the ability to “carve” out a turn.

Hard chines also pose a bit more of a risk of damage when bouncing off rocks than softer curves.

Rocker is the curve of the hull from bow to stern. Imagine a banana – if that were a kayak, it would have a high degree of rocker (unless it were one of those flat bananas the EU keeps sending to the UK).

A higher degree of rocker means the boat will turn fast, but the flipside is that a straighter hull will go straighter and faster.

The other consideration is that more rocker will ride over obstacles better, whereas a straighter hull will punch through obstacles. 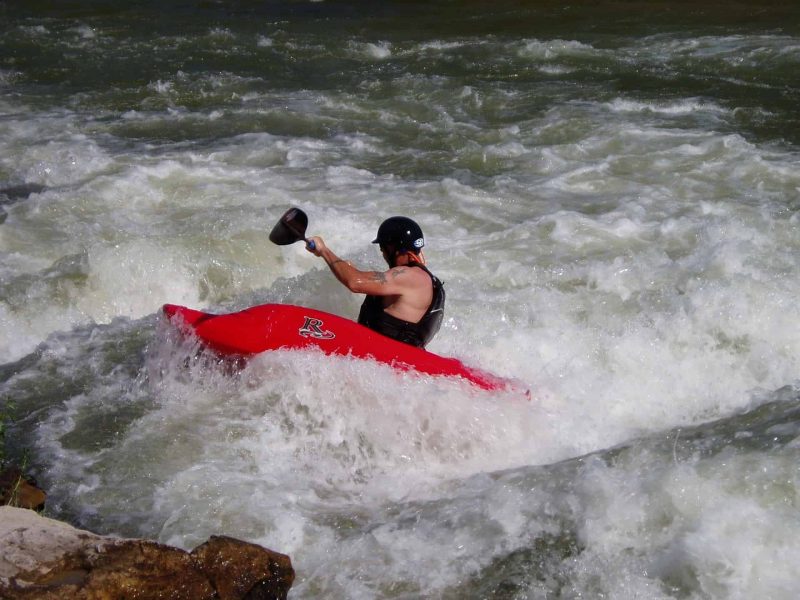 It will also vary slightly for different weights of paddler. It is probably best to get some advice from other paddlers on this matter, but remember that it isn’t the be-all-end-all of performance on the water.

So there are a load of things you might look for in a whitewater kayak. But how much of it applies to inflatables? Can an inflatable kayak perform well in the rapids?

Well, to answer the latter question, yes! You need only look at manufacturers like Aire who make super high-performance inflatable kayaks for whitewater.

The former question, though… Well, there is less flexibility in the design of an inflatable kayak in my opinion. It’s a rubber bag full of air, at the end of the day, there’s only so much you can do to change the design.

Inflatable kayaks tend to have flatter, planing hulls – there are hybrid inflatable-rigid kayaks that may be able to overcome this, but basically because of the buoyancy of the “sack full of air”, it sits ON the water. This necessitates a flat hull – have you ever tried to sit on one of those inflatable tubes they have at swimming pools? They just want to turn. I imagine that is what would happen if the blowup yak has a round bottom.

And this leads to having a wider beam, which is more stable, turns better, but tracks poorly compared to a narrower displacement hull.

The need for big, buoyant bladders (I love alliteration) also has implications for the total volume of the yak, but the flat hull and natural tendency of an inflatable to ride high on the water means the submerged volume will be low regardless.

Rocker, though. Now rocker we can do! Look at the Aire boats; they’re like those good old Commonwealth bananas, full of curves.

The other thing about inflatables is that they are pretty much invariably sit-on-top style, which means they can’t be rolled (can they?), and you might feel like you’re going to fall out. The flipside of that is that you can get back in easily enough; and if you have thigh straps fitted, then you probably won’t come out.

But you will get wet – wetter than a sit-in? I don’t know about that. If you’re worried about getting wet, try a dry suit!

Inflatable kayaks can be used for whitewater; it’s pretty self-evident.

Aire makes top of the range inflatables, and they have a line designed specifically for whitewater. AdvancedFrame also has a whitewater kayak model. But these will run you hundreds if not thousands of dollars. The cheaper options may take you downriver once or twice, may more even, but I wouldn’t trust the material to handle rocks even once, frankly.

Be assured that a good quality IK will just bounce off of rocks, rather than rip. If it does rip, then you know it isn’t quality! Too late by then though…