Maybe you like the idea of taking to the water in a boat that’s as easy to paddle as it is to pack up when you’re done. Maybe it isn’t paddling that interests you so much as fishing, and you want to get a boat that has plenty of room for fishing gear and is stable enough that you can stand up and reel in the catch of the day. Or you don’t care too much about what you do and where you go on that boat as long as you can take your family and friends along for the ride. 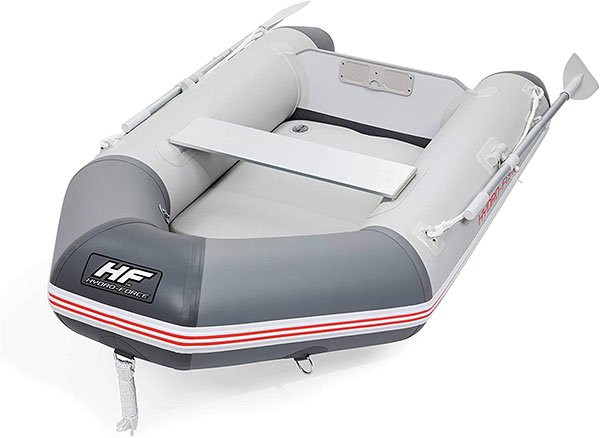 There are any number of reasons why you might be interested in an inflatable boat such as the Bestway HydroForce Caspian Pro. That’s why the big question is whether the Hydro Force Caspian, when confronted with the biggest items on boaters’ wish lists, will sink or swim.

First, let’s go ahead and get some of the most important specifications out of the way:

The first thing you’ll probably notice from that list is the big variation between the two weights listed — 50 or 98 pounds? How can a single inflatable boat have a difference of nearly 50 pounds? Well, there’s the rub: there are two different variations of the Hydro Force Caspian Pro. Check the weight listed and make sure that you’re getting the size you want.

That said, just because it’s big doesn’t mean it isn’t maneuverable, which is the case for many large inflatable boats. Granted, the 50-pound variant may handle better than the 98-pound one, but either way, this is a great example of an inflatable boat that tracks well on the water.

Another interesting quirk with this boat is the fact that it can accommodate two to four people, depending on how many of them are adults and how many are children. What’s more, this boat features a bench in the middle that can make for a great loveseat for a romantic outing on the water for two, or serve a more practical purpose while out fishing with friends.

You can also remove the seat entirely, which is one of the ways to expand its capacity and allow a couple extra people to clamber aboard. This is where that 568 pounds’ worth of carrying capacity really shines. This makes it easy for a couple friends or an adult with a few kids to climb in with their gear without weighing down the boat. Making that even easier? The fact that this model has more than enough storage space for an abundance of fishing gear.

The nylon PVC material is highly durable, and can allow this boat to brave waters that other inflatable boats cannot. Part of that durability is due to the fact that it has two distinct inflatable chambers, which also help improve its buoyancy and stability. In addition, it is UV-resistant, and so won’t fade easily in the sun.

Then there is the plywood. This is essential for any boat in which fishing is to be possible, and the Hydro Force Caspian Pro has marine-grade plywood that is seaworthy and stable. Even better, because this model is inflatable, it is deflatable too, which means that it is easy to roll up and transport before or after your time out on the water.

Here you can check a quick video overview by SV SareBear:

One of the best-received features of this boat are the aluminum oars. They make it incredibly easy to row the Hydro Force Caspian. In fact, they make it far easier for children than other oar-boat combinations. Sure, they aren’t professional-grade, but if you are looking for an accessible introductory model with which to take your kids fishing and teach them how to paddle, this might be a great choice. Users have also liked the sturdiness of the plywood floor and how suited it is for fishing.

By contrast, as mentioned, the oars are not meant for professional use, which means that this boat is not as fast on the water as others. It also lacks D-rings.

Is HydroForce Caspian Pro Worth It?

The Hydro Force Caspian is quite a versatile inflatable boat. It’s intimate enough for a romantic day on the lake between lovers, sturdy enough to support fishing, and easy to pack up. Wherever you want to go among life’s rivers and lakes, short of professional races, this boat can take you there.