It’s fair to say that there are few things more sought after by those who love a day out on the water than paddleboards. In just a few decades, they’ve gone from a niche item to one of the most popular ways to pass time on the waves. Whether you’re an expert paddleboarder or someone looking to break into the pastime, this is the golden age of paddleboarding! 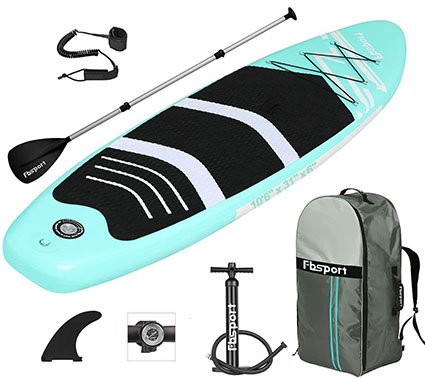 At the same time, this rise in paddleboard popularity has seen a concurrent increase in interest in inflatable models. Like paddleboards proper, these were once more niche options but have now grown to be one of the most popular alternatives on the market.

With that in mind, let’s take a closer look at the FBSport paddleboard and see whether this inflatable paddleboard option is sink or swim.

General Features To Know About

Before we go any further, it would be helpful to get an idea of what we’re up against.

Time waits for no one, and for no vehicle or innovation either. As such, paddleboards have changed a lot over the past few decades, including inflatable ones. Most notably, they are a lot more durable now than they were just a few short decades ago. That’s because paddleboards today use materials that are far stronger than those used in the past. This is what allows people to paddleboard on inflatable options with ease without worrying that they’re riding a glorified water balloon that could pop at any second. While inflatable options still aren’t as strong as traditional paddleboards, the drop stitched materials from which they are made are quite sturdy.

On the other hand, there are some things that inflatable paddleboards haven’t been able to perfectly replicate contra their traditional counterparts, and that includes tracking. In general, while they are vastly improved from previous decades where they did more or less float lightly like balloons upon the waves, inflatable boats and paddleboards don’t track as well on water as hard-shelled options. You’ll, thus, want to look for models that can counteract this natural downside.

On the plus side, paddleboards are naturally lighter and, thus, far easier to transport than your average hard-shelled paddleboard. This is, of course, due to the fact that they can be deflated and rolled up for easier storage. At the same time, you don’t want to be stuck waiting around forever for the board to deflate, so you’ll want to make sure you find a paddleboard with good valves and deflation time.

Taking those factors into consideration, we can better evaluate the prime features offered by the FBSport paddle board:

The first thing you probably notice about this board is that it’s big. The FBSport paddle board definitely isn’t one that is meant for beginners. That kind of size takes some skill to use. At the same time, if you have the skills to go with the size, there are definitely features about this model that reward your extra effort.

Take, for example, the fins on the bottom. As mentioned above, inflatable paddleboards typically need to find a way to compensate for the fact that they aren’t as naturally good at tracking and turning on the water as traditional boats and boards. The FBSport paddleboard solves that problem neatly by not just including a trifecta of fins on the bottom of the board, but making two of them removable. You, thus, have more control over what kind of tracking ability you want your board to have. After trying out the board for yourself, you can decide whether it cuts across the water and handles better with your personal style with one or three fins.

In addition, the fact that this paddleboard is on the larger side means that it can support larger riders. While it can’t handle riders over 300 lbs, its weight capacity of 280 lbs is a big plus for bigger paddleboarders – or those looking to take a passenger along for the ride. This can be a child or a pet. The latter in particular has proven especially popular with paddleboarders the past few years, so the inclusion of a non-slip top and pet-friendly design seems geared to make the FBSport paddle board a crowd pleaser. You might be even able to fish from this particular paddleboard.

As mentioned above, you don’t want to have to wait around forever for your paddleboard to deflate. That isn’t a problem with this model, with the inflatable plugs easy to work and the model easy to deflate after a ride out. Incidentally, this model does best when inflated to 15PSI.

Of course, none of that will count for much if your paddleboard pops and sinks the first time out. Thankfully, with the FBSport paddleboard, that isn’t a problem. Its drop-stitching and military-grade material make sure of that. This board is good and durable, a fact which is reinforced all the more given the extra features this unit has up its sleeve. For example, its exterior features an anti-aging and anti-UV design, which helps ensure that your days in the sun don’t bleach the color or effectiveness out of your paddleboard. In addition, this model features a special scrape resistant design that helps ensure that rocks or sandy shoals aren’t the end of your board, either.

Some of the best features offered by this model include:

A few potential cons to keep in mind with this paddleboard are:

As noted, this board can take a few bumps and bruises and emerge none the worse for wear. This, combined with its large non-slip deck, makes it a great choice for those ready for big, bold paddleboarding adventures. At the same time, this model offers a ton of convenience as well. Given how easy it is to deflate and the included carrying bag, this is probably one of the most easily portable inflatable paddleboards of this size.

It is fair to say that the pump included with this model is pretty weak, and some users have even reported that their tubes sprang leaks. That said, it’s pretty easy to get another, affordable pump should that prove necessary. This model is a bit more expensive than the average board, but you get what you pay for and, as mentioned above, in this case you get quite a lot.

Is the FBsport Paddleboard Worth It?