Choosing a big kayak is a big decision, and not one to be taken lightly. Whatever the final price of the kayak you can expect to spend hundreds, and whatever you choose to use it for you can bet that you’re going to want to use it for a long time to come. 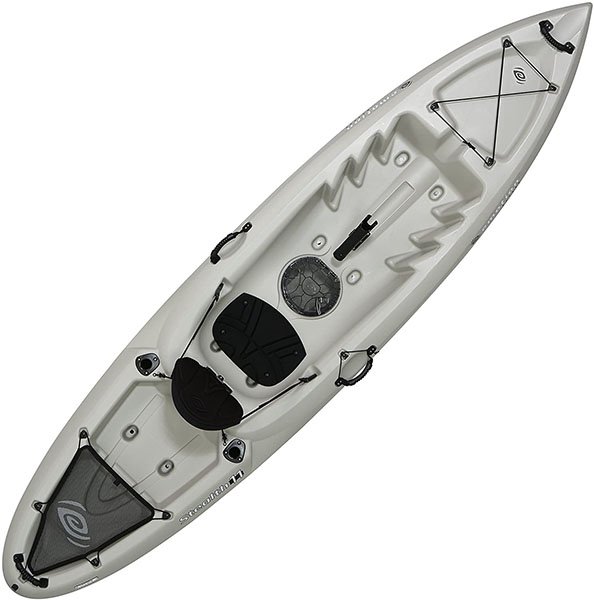 You want your investment to pay off, which means making sure that the kayak meets your needs.

With that in mind, let’s take a closer look at the Emotion Stealth 11 and see how it squares with your kayak wish list.

Some of the most important features of the Emotion Stealth 11 model include:

As you can tell from features such as the tackle boxes and rod holders, the Emotion Stealth Angler is constructed with fishing in mind. These features make that easier, giving you plenty of room to store bait while also allowing you to fix your rods in place. Both of those features are relatively simple, but the end result is a much easier time “Gone Fishing.”

One interesting quirk of this model is the fact that it is more accessible to beginners than most kayaks of this size. Most times, when you have a kayak this big, beginners have a harder time navigating with it given the difficulty of moving heavier pieces and navigating with a larger model. What’s interesting about this model is that it doesn’t necessarily subvert that as far as its size or weight go, as both of those are still on the larger size. Even so, this model is easier to transport than others of its size.

The feedback from users have typically focused on this model’s size and how it uses it.

On the one hand, there are plenty of users who are quite happy with the overall size and how this kayak employs it. One of the biggest standouts of this model in that regard is the fact that it has so much storage capacity. There is plenty of space in this model to store tackle boxes for fishing as well as all manner of other accoutrements, and users have appreciated that a great deal. They have also tended to appreciate the spaciousness of the unit overall, as it gives them more room to spread out in the kayak and make themselves comfortable.

That said, as is typically the case with a kayak this size, some users have found this model to be somewhat overwhelming. On the one hand, that’s something that’s to be expected of a kayak of this size, and is more a complaint against this size class than the Emotion Stealth 11 itself. On the other hand, it is still something to keep in mind when considering it.

Less glowing has been the commentary on the hull thickness itself. Some owners have found the hull too thin, which has made it vulnerable to hull breaches and other problems. Granted, there aren’t too many reports of this model’s hull being breached, but the risk of the hull splitting or otherwise becoming damaged is nevertheless present.

Also, on the thin side is the padding for the seats. While the overall spaciousness of the kayaks won praise in terms on the comfort side of things, the lack of cushioning lost some of those in the eyes of some users.

Here is a great overview of eMotion Stealth 11 Angler by Bobby Pennington Adventures:

Some of the best features of this model are:

Some of the potential drawbacks include:

One of the best things about this kayak is how well it tracks on the water. It isn’t necessarily a kayak you would peg as one that is built for speed, and indeed it may not win any races, but its sleek construction allows it to cut across the water far faster than you might expect. This, in turn, allows the kayak to remain stable and handle well in different water conditions. All of this combines for a very versatile kayaking experience.

It is also a great kayak for fishing, which is one of the biggest reasons people tend to purchase kayaks in the first place. If you are looking for a kayak with lots of room for tackle and good rod holders, this may be the kayak for you.

On the other hand, the thinness of the hull is certainly concerning. You don’t need to start humming the theme to Titanic just yet, but it’s always concerning when “thin hull” is listed among the cons for a kayak, and it’s the biggest drawback of the Emotion Stealth Angler.

More complex is the way in which you should view the kayak’s comfort situation. You have plenty of space, which is normally enough to rank a kayak as quite comfy, but the seats included are thin on padding. Whether or not that matters is a matter of personal preference. Even so, it’s something to be aware of when purchasing this kayak.

Is eMotion Stealth 11 Angler Worth It?

The Emotion Stealth 11 is an intriguing kayak for this size class. It is a lot more maneuverable than most kayaks of its size, and it has the speed to back that up as well. It’s also nice and spacious, giving you plenty of room to move around and fish as well as to store your different catches. The big question is whether you’ll consider the kayak worth the money given how thin the material is compared to other kayaks, and that is in large part subject to everyone’s subjective analysis.

What is objective, however, is that this is a large kayak that maneuvers well, and with it being more accessible for beginners as well, the Emotion Stealth Angler can make for a good first “big” kayak for newcomers.