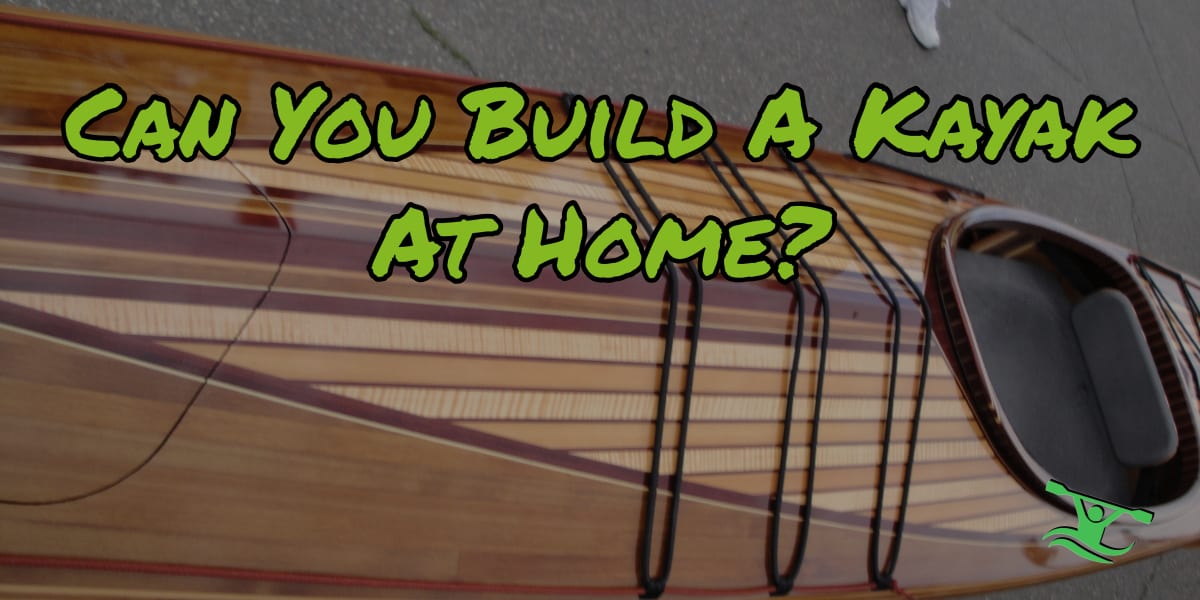 A few years ago, I thought to myself “I really want to build a kayak”. I can’t really put my finger on WHY that thought came to me – such thoughts do occur on occasion, maybe I’m just a bit of a lightning-rod for inspirons. Or something.

Anyway, usually nothing comes of it. “I’d like to make a water wheel and grind corn!” Nope, still no water wheel. “I want to make a harpsichord!” Not yet. But kayak, that stuck with me. I bought all the material and plans and have actually started.

Goodness knows when I’ll finish, but starting is half the job. Well, maybe 1% of the job, anyway.

So if you’re hoping to build a kayak of your own, rest assured: you’re not alone, and it is possible. If you’d rather just buy one, take a look at my homepage for some ideas.

In this article, I’m going to look at a few of the more common methods of home-building kayaks, and any pros and cons associated with those methods.

I’ll let you know how I’m doing it too. Honestly, it’s going to be awesome.

So there are a few different methods. I’m not going to list every possible permutation, but just the most common and accessible. You probably don’t have an injection mould or whatever, so plastics aren’t going to feature too heavily (but they’re there).

A strip built kayak is built using strips of wood, quite thin, which are glued edge-to-edge around a form. Then they are usually covered in fibreglass for added durability.

Because you use lots of narrow strips of wood, you can really be quite creative in making a strip built kayak. Indeed, you do see some incredibly beautiful kayaks built using this method.

The big advantage of this method, apart from the creativity in aesthetic design, is that you can make very interesting shapes too. Compound curves that wouldn’t be possible with a skin-on-frame kayak become achievable with strip-built yaks.

The downside is the fact that they are pretty labour intensive, and once you’ve started the kayak you need to finish it in situ really because they are quite fragile to move half built. It’s also likely to be a bit more expensive than other methods, but if you have the time and expertise and dedication too then you will end up with an amazing piece of art moreso than a boat.

Strip built kayak plans, and kits are available if you want to give it a go, and there is plenty of information and videos on the internet for you to peruse. In my experience, videos take the place of building quite nicely!

Obviously, a dugout is not really a kayak but more of a canoe. I suppose you can dig it out into a kayak design, I dunno. I really included this just for the sake of it.

Dugout canoes are quite popular on boat building forums and the like, and it is a very traditional method of making a boat.

I guess the advantage of this method is that it is cheap and doesn’t require any super specialized tools. Heck, if you’re going to go all trad on us, then you can do it with hand tools!

This is a traditional kayak method, now. It has been revitalized in modern times, and you can get in on the action too.

I’ve seen these made from willow branches and waxed sheets, PVC pipe and plastic tarpaulin, canvas on wood. Nowadays, you can get plans to build a frame from plywood or other woods (plywood can be quite heavy, but it’s pretty cheap). Then all you need to do is stretch a cover over it tightly.

These are really cool, actually, and quick to make if you’re not dead-set on getting it perfect. I wouldn’t take a homemade jobby out on the sea, although traditionally a skin on frame kayak was the high end of technology. But if you look at some of these ones on Instructables then you’ll see why I wouldn’t trust it to anything but a bit of light paddling on a calm, summer day.

Having said that, there are some of these type that people have actually spent a decent amount of time on and the effort really shows.

If you want to make a kayak as anything more than a rainy afternoon project, then this is a good shout. They look really good when done well, and obviously perform satisfactorily too.

The pros of this method are the traditional approach; obviously something worth mentioning. Kayaks existed in this fashion for thousands of years, so there must be something good about skin on frame. They don’t require any specialist tools, although they do help a lot.

This type of kayak should also be pretty light, which is a bonus, as well as being durable if well constructed.

The cons are that it is pretty labour intensive, and is such a specialist skill. Not really a dealbreaker.

This “build a kayak” method is probably the most common homemade kayak recipe. The gist of it is that you cut lots of bits of plywood to make the right shape for a kayak – it’s basically a polygon with lots of flat sides. Then they’re stitched together, often with copper wire. Then the seams are covered with fibreglass resin, or the whole hull may be coated if it’s a multi-chine boat with lots of seams to proof.

This is relatively cheap and easy and fast compared to some of the other methods. Of course, you do end up with a much heavier boat, but it’s quite a solid, durable design and it can be repaired quite readily if you do put a hole in it or something. This is the method I’m using to build my kayak. Really the most difficult part (so far) has been copying the shapes from the plans onto the plywood.

If you want to give this method a go, there are plans available from Chesapeake Light Craft and from Fyne Boat Kits. You can get the plans alone, or a full kit which includes all of the pieces laser cut to order. I wish I’d gone for the latter!

I’ll keep you updated on how my build goes, anyway.