There is something to be said for knowing what you want and having a sense of direction in life. Happy is the day when the former aids the latter and your ability to navigate life’s ebbs and flows is helped along in satisfyingly literal fashion by something such as a kayak. Too often in life, we are left guessing about where to go and what comes next, or else feel like we’re pressing too hard to make things happen. At their best, kayaks give you the best of both worlds, allowing you to chart your course and paddle forward while also allowing the soft waves lapping at the stern to sweep you along. 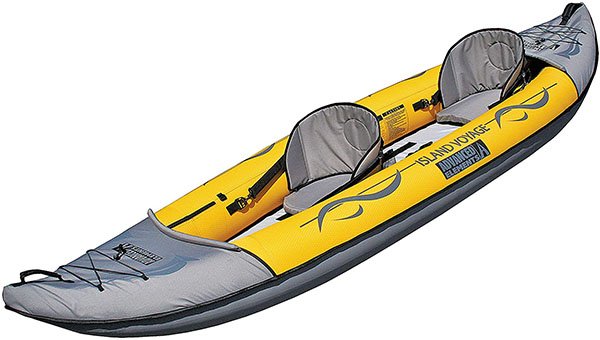 Of course, that is contingent upon finding the right kayak. As described below, that’s going to be a choice everyone has to make for themselves as everyone has their own wants and needs.

Still, some kayaks manage to set themselves apart from the pack, and such is the case with the Advanced Elements AE3023-Y. There has been a lot written about this kayak already, which is a testament to its overall quality and ability to catch on with different audiences.

That latter part is especially impressive since kayaks have a way of landing themselves in niches. Some are better for one kind of kayaking while others are better at other activities.

However, the Advanced Elements really does find a way to appeal to everyone from newcomers to the kayaking game to those who’ve paddled the way around the pond again.

But why is that? What can this kayak do for you?

Let’s take a closer look at this kayak from Advanced Elements, see what it has to offer, and you’ll see why this kayak is as good for learning the ropes as it is for hitting the water with friends and family.

First, let’s take a quick look at the specifications and features on display with the Advanced Elements Island Voyage 2:

As with so much else that lives up to the hype surrounding it, however, there’s a lot more to the Advanced Elements Island Voyage 2 than meets the eye with that spec sheet.

For starters, that multilayer construction is more durable than you might think. If there is one thing you want to avoid when paddling out on the water is a leak. You don’t want to find yourself plumbing the depths of the waters because your paddle boat or kayak has taken on water, which is why it’s so important to find a vessel that won’t tear easily.

Years ago, this used to be harder, but now, there’s a much greater selection of durable kayaks from which to choose. Of course, that makes it all the harder to stand out, which is what makes the durability of the Advanced Elements Island Voyage 2 stand out.

In addition, this model tracks quite well on the water, which is a testament to the quality of the underside of the kayak as well as its retractable skeg.

Another essential factor to look for in a kayak is its size. It is vital that your kayak match your sizing needs as well as your expectations. Too big, and you find it too overwhelming to use as a beginner. Too small, and you’ll instead find it too cramped, especially if you are an experienced kayaker.

It is, therefore, essential that you know your skill level before buying a kayak. Thankfully, there is a case to be made for both beginners and experienced kayakers finding something they like in the Advanced Elements Island Voyage 2.

Here you can check a good overview video by THE VILLAGES FLORIDA NEWCOMERS:

Users have also responded positively to the tear-resistant padded foam seats and a PVC for the shell. Both of these make this inflatable kayak a lot more durable than it would be otherwise.

For beginners, the fact that this kayak is a two-seater is a godsend. When you are first learning how to kayak, the last thing you want is to be thrown into the deep end on your own. You want someone there to help you paddle and instruct you, which means your kayak needs space for both of you. This is a major shortcoming of one-seater kayaks, which is why learners want and need two-seater kayaks.

In fact, the same is often true of experienced kayakers. After all, once you master the basics of kayaking, what better way to celebrate than hitting the water with a friend? In this respect the Advanced Elements AE3023-Y comes up big again. Not only does it boast a two-seat design, but it is also sturdy enough to carry a crew of two thanks to an impressive carrying capacity of 400 lbs. This should be more than enough to hit the water with a friend as well as some fishing gear in tow.

As alluded to above, the larger size of this kayak has received a warm reception from kayakers new and old. Reviews have spoken glowingly of the spacious 11 ft-plus length of this kayak, so if that is a major concern for you, these reviews should put your mind at ease.

Thus, both experienced and new kayakers have responded warmly to this kayak.

Some of the best features of the Advanced Elements AE3023-Y to take into consideration are:

Some of the potential downsides to getting the Advanced Elements AE3023-Y include:

The main drawback of this model becomes pretty apparent right away, in large part because it’s the same as its number one asset – its size.

On the one hand, this article has already sung the praises of this model’s spacious build and how it’s big enough to accompany two people plus fishing tackle while still being manageable enough to be used by beginners.

On the other hand, there’s also no denying that this model is on the larger side for kayaks, and that comes with its own set of drawbacks. While this is far from the least portable option on the planet and, in fact, is probably a bit easier to carry for a kayak of its size than many comparable competitors, that doesn’t mean that it’s “lightweight” or that it can fold up and fit neatly into a car the same way as others. That doesn’t mean you can’t do that, of course, just that it’s going to be a bit more challenging.

It isn’t as though there aren’t smaller or lighter alternatives, either. There are plenty of kayaks that are lightweight and can fit into the back of your trunk with ease. The difference is that those models don’t often have the kind of two-seat build and carrying capacity as this model.

As with everything in life there are pros, cons, and tradeoffs – and thankfully the upsides outweigh that nebulous downside for this model.

As mentioned, one of the most difficult things to do when shopping for a kayak is to strike a balance between the different impulses that force you to go this way or that on a purchase. There are so many competing aspects of kayaks that it can be hard to get one that has all-around appeal. The bigger ones tend to be too difficult for beginners or else too much of a hassle to carry. The smaller ones tend to be a bit unsatisfying for experienced kayakers or unable to handle rougher waters.

As stated above, this kayak from Advanced Elements does a remarkable job of being able to do both. It offers just enough to keep experienced kayakers happy while giving newcomers a kayak that they can get used to with the help of an instructor and not freak out.

The foam padded seats also do a great job of keeping the kayakers comfortable while they head out on the waves, and that’s no small thing. You don’t want to spend your time out there squirming atop some hard surface or cramped cockpit. This kayak gets it just about absolutely perfect.

Again, while this kayak isn’t heavy, the biggest strike it has against it is that it’s big enough at over 11 ft that it can be hard to fit it into your car compared to other models.

Still, that’s hardly a very major minus when set against all the highly palpable pluses that come with this model. It is perfect for those looking to set out on a fishing expedition, hit the waves on their own, or handle rougher waters with friends.

There are a lot of potential kayaking activities, and likewise quite a lot to recommend about this kayak courtesy of Advanced Elements.