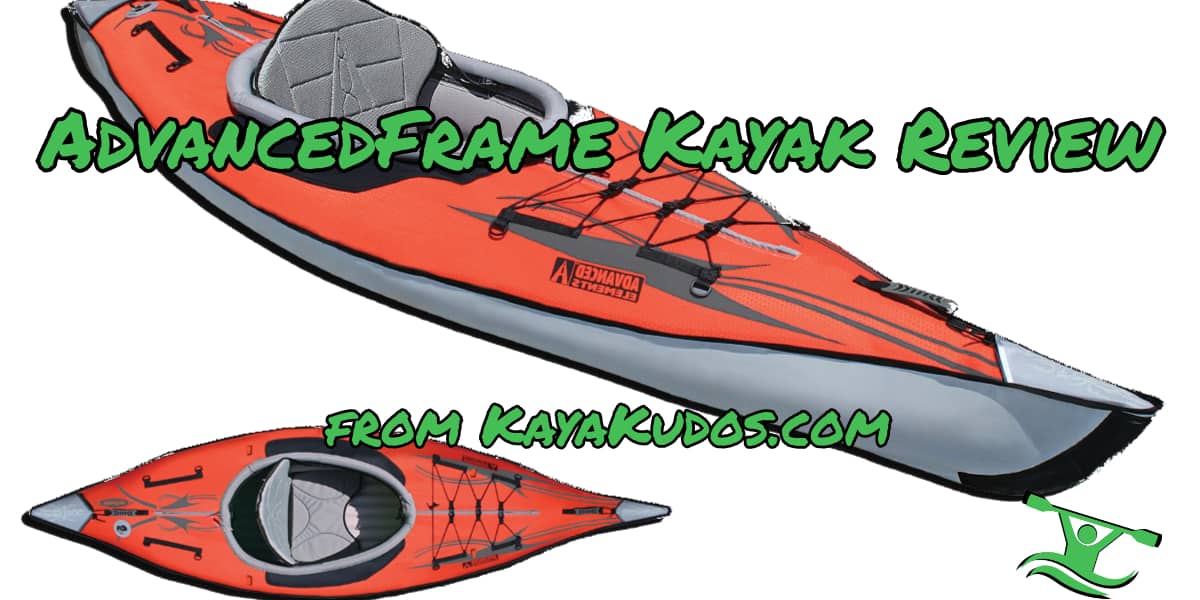 If you live in a densely populated area, you know that space comes at a premium. Urban paddlers have few options: renting a boat every weekend, buying a very expensive folding kayak, or paddling an inflatable. In the past, inflatable boats were of dubious quality, combining the durability of a pool tool with the steering like an inner tube. More recent advancement in construction and design have made them comparable with hardshell boats though – a godsend for city-dwelling paddlers and the AdvancedFrame kayak from Advanced Elements is the latest in the evolution of high-performance inflatables.

On first look, the AdvancedFrame is a fairly standard inflatable kayak, measuring 10.5 feet long and 32 inches wide. It’s relatively short length makes it a good choice for narrow rivers, but with a width that gives novice paddlers the peace of mind that they’re not going to tip over.

The kayak has a stated weight limit of 300 lbs, but given its length, there’s not a whole lot of room to store equipment. The hull is constructed from three-layers, a polyester fabric sandwiched between two layers of vinyl. It’s strong enough for basic river running, but you also don’t want to roll into any sharp rocks with it.

Inflatable kayaks aren’t typically known for their performance – they sit above the waterline, which makes the boat less responsive. Their lack of rigidity also prevents them from tracking as well as a hardshell boat, instead paddling like a a miniature raft. The AdvancedFrame remedies this problem, to some extent, but allowing you to insert aluminum reinforcements into the bow and stern. These improve the tracking, as the boat is less likely to deform in strong current or waves. It won’t be as responsive as a hardshell kayak, but it’s a marked improvement over most inflatables.

It should be noted that the 300 lb. weight limit is somewhat misleading. While the boat is capable of carrying that much weight, the kayak’s documentation states that the paddler weight limit is closer to 225 lbs., with a 65-75 lb. cargo weight limit. In many inflatable kayaks, the hull tends to sag in the middle with heavier paddlers – you should expect the AdvancedFrame to do so as well, unless you purchase the optional rigid backbone (which will also improve the boats tracking). The extra piece of equipment doesn’t come cheap though, adding another $85 to the price of an already expensive inflatable. However, with the backbone, it will feel very similar to paddling a hardshell.

One of the most impressive features on this boat is its ability to attach a sprayskirt. Many inflatable boats simply forgo the skirt because it’s expected that they won’t be used in rough waters where the paddler could get splashed. However, the AdvancedFrame has an inflatable coaming, the rigid cockpit ring on where the skirt attaches. While the boat is still not designed for running big rapids, having a sprayskirt means you won’t spend valuable time bailing the boat out after a small wave crashes on the bow.

While a 10.5-foot hardshell usually provides plenty of space, even for taller paddlers, this inflatable will not. Anyone over 6 foot will probably feel a bit cramped in the Advanced Elements AdvancedFrame kayak due to the air chambers decreasing the interior volume. Additionally, you won’t be bringing along too many gear as there’s very little storage space behind the seat. Lunch and a water bottle will fit, but you probably won’t want to make this your next fishing kayak.

On the other hand, the adjustable padded seat is relatively comfortable as far as kayak seats go. The back is a little taller than you would find on some inflatable kayaks seats, which keep you comfortable for at least a few hours.

When purchasing an inflatable kayak, it’s important to be realistic about its limitations. There are some boats that are designed for running dangerous, whitewater sections and are designed for durability – this is not one of those boats. The polyester and vinyl fabric will hold up for years of paddling on smooth rivers, it won’t last long if you’re running it through rivers with big boulder fields or dragging it across rocky beaches. Treat it nicely, and don’t take it in water it wasn’t designed for and it will last a long time.

That being said, the kayak is incredibly well made, which helps to justify its higher price tag. The bow and stern have thick, rubberized handles that allow two paddlers to portage the kayak with ease (remember, it only weighs 36 pounds). For storage, the front of the boat features some very tough deck rigging, which hold strong after stowing many a dry bag.

One of the biggest complaints with inflatables is that the valves seem to fail after a year or so, because they are little better than the ones you’d find on a pool toy. The AdvancedFrame comes with an incredibly durable spring valve that attaches to their bellows foot pump – easily inflating the boat in a few minutes.

The most common reason for purchasing an inflatable is lack of space; if you live in a smaller apartment there’s probably nowhere to put a 10’ or longer hardshell. The AdvancedFrame occupies as much space in your closet as a carry-on suitcase.

In addition to saving space, inflatables are also very portable, with the AdvancedFrame folding into a small duffle bag that can easily be carried on public transportation. The fully loaded bag weighs 36 pounds, which is a little heavier than you would expect for a relatively short inflatable boat. It’s not going to be convenient to lug it down a rough trail for a few miles, but for carrying from the car to the put-in point, it’s alright.

Why You Need the Advanced Elements AdvancedFrame AE1012 Kayak

The AdvancedFrame from Advanced Elements is one of the better inflatable kayaks on the market right now, providing an excellent paddling experience for those that want a compact boat for mild river running.

The biggest drawback is that it’s a bit pricier than some of the other inflatables. This is especially true if you add the optional Backbone floor, but such a comparison isn’t necessarily fair. With the Backbone, the AdvancedFrame hull is more rigid than similar inflatables, improving its tracking and making it easier to paddle.

Add that to its incredible portability, and you see that a more accurate comparison would be with a rigid folding boat, which would have a price three times greater than the AdvancedFrame. It’s probably not an ideal boat for beginner kayakers that aren’t sure what they’re looking for, but for intermediate and advanced paddlers that aren’t too tall and don’t have the space for a hardshell, this could be an excellent choice.

If you need more guidance, I have written an inflatable kayak buying guide here.